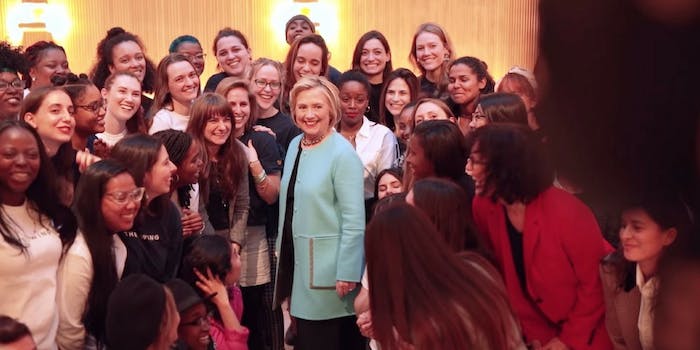 Watch Clinton fire up a room of women at co-working collective the Wing.

Hillary Clinton is still serving up the inspirational quotes piping hot, and a recent appearance at women’s co-working space the Wing shows that young women are still enamored by her presence.

In an Instagram post on Sunday, the Wing shared some of the magic from last week’s speaking event with the former Democratic presidential candidate.

As many an inspirational, women-centric event recap videos do, the Instagram post, hitting more than 18,000 views over the past 18 hours, shows slowed-down, panning shots of women excitedly conversing before the event, revealing glimpses of the Wing’s unbelievably trendy New York City working space. More chilling and emotional are the shots of women just staring warmly or smiling directly with teeth bared at Clinton’s general presence, projecting a genuine mix of joy and wonder. Ahh, what could have been.

According to the Cut, co-founder Audrey Gelman, who interviewed Clinton at the event with Call Your Girlfriend podcast host Aminatou Sow, launched the Wing in 2016 just weeks before the presidential election. As a women-only membership-based co-working space, the Wing has since opened two more locations in New York, one in Washington D.C., and plans to open in six other locations:  London, Toronto, Brooklyn, L.A., San Francisco, and Seattle.

“…I want to see more young women supported in places like the Wing. In their workplaces and in their families and in the political arena,” Clinton told the audience. “Because, it is clear to me that we’ve made an enormous amount of progress, but there is a backlash, and the backlash cannot be permitted to undermine individual women or women’s progress.”

Controversy over the women-only co-working space surfaced last month when Jezebel reported that the New York City Human Rights Commission had launched an investigation into the Wing for possibly violating the city’s human rights policies regarding gender discrimination.

Advocates for the Wing say it serves a specific and necessary social good in creating a safe and collaborative co-working space for women. However, the Wing, along with other social clubs, also fields criticism for its fees that may be isolating to women who cannot afford such memberships, though the Wing is currently developing a scholarship program.

“Don’t let the past drag you down,” the video ends with Clinton stating. “Don’t let whatever happened to you by anybody put a stop to your dreams.”

Watch the full video from the Wing’s YouTube channel below: