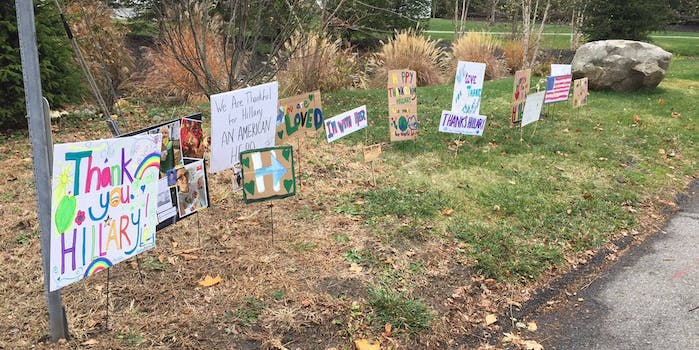 Hillary Clinton gets an unexpected surprise on her street

The election came and went, but Hillary Clinton’s supporters are here to remind us that she won the popular vote both across the country and in our hearts. Clinton tweeted this photo yesterday of some lovable stalkers who saw fit to decorate her street corner with signs of love and support.

I was greeted by this heartwarming display on the corner of my street today. Thank you to all of you who did this. Happy Thanksgiving. -H pic.twitter.com/b69mW3Oqbf

After the election, supporters—children especially—also showed their appreciation with chalk-written thank-you notes in front her campaign headquarters.

There are kids and families writing thank you notes in front of Hillary HQ.

Happy Thanksgiving, Hillary! Everyone knows not just where you work, but also where you live!