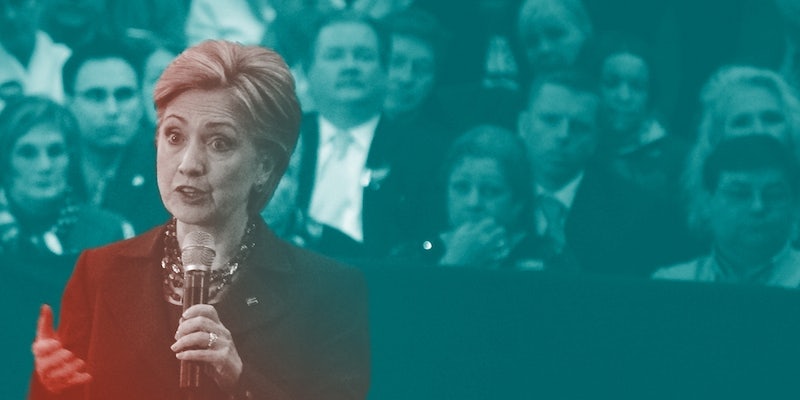 Hillary Clinton calls for police everywhere to use body cameras

It's still unclear how far she would go as president to push reform in America's police departments.

In her first substantive speech as 2016 presidential candidate, Hillary Clinton called for the nationwide use of police body cameras, a substantial reduction in nonviolent incarceration, and increased funding for mental-health programs.

“I’ve seen the positive effects of specialized drug courts and juvenile programs work to the benefit of individuals and communities,” Clinton said. “And please, please, let us put mental health back on the top of our national agenda.”

“Our prisons and our jails are now our mental health institutions,” she added.

The United States imprisons far more people than any other country—one in 99 American adults are in jail. A sentencing regime known as mandatory minimums forces judges to hand down harsher prison terms for users of certain drugs, including crack cocaine, which is disproportionately used by minorities.

Clinton’s speech comes as Baltimore residents continue to protest the death of Freddie Gray, a 25-year-old African-American man who suffered suspicious and ultimately fatal injuries while in police custody. Police brutality has been in the headlines almost continuously since August 2014, when Ferguson, Mo., erupted into protests following the killing of unarmed African-American teenager Michael Brown by Officer Darren Wilson.

Protests subsequently flared up in New York, where the July 2014 death of Eric Garner in a police chokehold gained new attention, and in Charleston, S.C., where a police officer fatally shot Walter Scott eight times as he fled the scene.

“No one is disposable,” Clinton said, acknowledging the frustrations of protesters in these and other cities. “Every life matters.”

President Barack Obama, former Attorney General Eric Holder, and other administration officials have linked mass incarceration, mandatory minimums, and police brutality to make a broader argument about discrimination against people of color. They argue that the problems in minority communities are as much, if not more, about mistreatment by the authorities as they are about individual responsibility. In her speech, Clinton echoed this analysis and urged policymakers to enact a bold antipoverty agenda.

“We can’t separate the unrest we see on our streets from the cycles of poverty and despair that hollow out those neighborhoods,” Clinton said.

Obama has announced a task force to study America’s police practices and suggest reforms. In her speech, Clinton said the task force was a “good place to start.”

Sen. Rand Paul (R-Ky.), who is running for the Republican nomination in 2016, has made criminal justice reform central to his effort to win over young people and minorities, who traditionally vote for Democrats.

“We can make sure that we take actions that are going to make a difference in the lives of those who, for too long, have been marginalized and forgotten,” Clinton said. “Let’s protect the rights of all our people.”