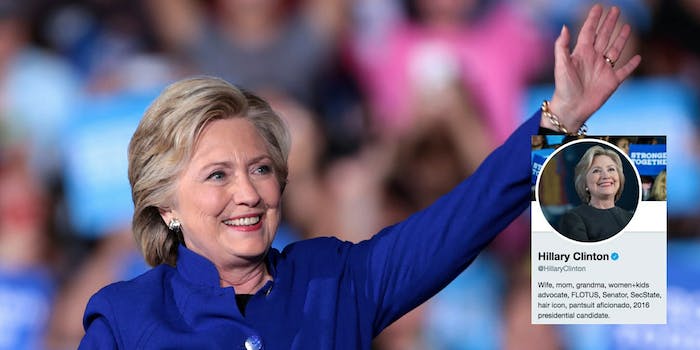 Hillary Clinton is questioned why her Twitter bio leads with ‘wife’

A conversation with author Chimamanda Ngozi Adichie may have Clinton revising her Twitter bio.

A recent conversation with author Chimamanda Ngozi Adichie may have former Democratic presidential nominee Hillary Clinton revising her Twitter bio to deemphasize her roles as “wife,” “mom,” and “grandma.”

At a PEN World Voices Festival lecture in New York City on Sunday, Adichie asked Clinton why it was that her biography on the social media platform led with “wife”—followed by her other relationship-based roles—before delving into her political and cultural accomplishments, according to Jezebel.

“When you put it like that,” Clinton responded to Adichie, “I’m going to change it.”

Clinton then explained that, in using the identity as “wife” to kick off the social media description, she had illustrated that women should be able to celebrate relationships and accomplishments. She credited the concept to a speech given by former First Lady Barbara Bush in the early 1990s. However, in reflecting in the moment, Clinton told Adichie that she wasn’t sure Bush was right.

“It shouldn’t be either/or. It should be that if you are someone who is defining yourself by what you do and what you accomplish, and that is satisfying, then more power to you… If you are someone who primarily defines your life in relationship to others, then more power to you…” she continued. “But I think most of us as women in today’s world end up in the middle. Wanting to have relationships, wanting to invest in them, nurture them, but also pursuing our own interests.”

Clinton’s response, as Jezebel also pointed out, is essentially the crux of feminism—getting to define yourself as a woman however you please, but also being able to flourish in that definition.

Adichie’s suggestion may very well have Clinton changing her Twitter bio regardless—though, as of this writing, it still states she’s a “wife” first. As Adichie herself suggested, Clinton should add, “‘Should have been a damn good president,'” while she’s at it.