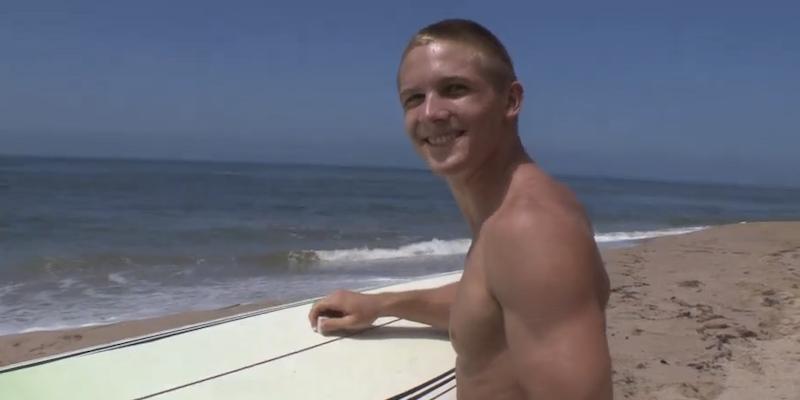 Because the best thing you can do for a student is keep them out of school.

Instead of defending Noel, or protecting him from bullies, Cocoa High School accused Noel of causing a “campus disturbance.” Although Noel was of age when he shot his scene, making his activities totally legal, the administration suspended him for 10 days. His enforced absences led to him failing his classes, which effectively barred him from graduating.

Now, with the help of his friends and members of the subreddit r/gaybros, Noel is fighting back.

Noel was brought to the attention of Reddit two days ago, when a Redditor claiming to be a cousin of one of Noel’s classmates posted his story on an r/gaybros thread.

Redditors on r/gaybros immediately voiced their support for Noel, urging Noel’s family to contact the ACLU and posting the contact info for school district officials, as well as Cocoa High principal Dr. Stephanie Soliven. The Gaily Grind  also picked up the story, confirming Noel’s story after tracking him down on Facebook.

Fortunately, it seems like many of Noel’s classmates are rallying in his defense. Many of his Facebook friends have changed their defaults to “Support Noel,” and students demonstrated on his behalf by staging a walkout during their seventh-period classes last Friday. Even the Facebook page for Cocoa High School has been barraged with complaints from current students and alumni, criticizing Soliven and the administration for discriminating against Noel.

Absolutely disgusting what you’ve done involving [Noel’s] education and his lawful choices that took place outside of your school. As a member of the LGBTQ community, you have no idea how backwards this makes your school and our town look.

Do the ethical, moral, and LEGAL thing and fix this atrocity immediately. You owe us all one giant apology.

It is shame Principle Stephanie Soliven would take it upon herself to suspend a student for nothing illegal.

If she was a true educator who loved ALL children, she would have counseled this young man about his choices and made sure he was ok and not being taken advantage of.

Instead she decided to illegally suspend him just enough days not to graduate.

She, the school and school board should be sued!

Hate of others lifestyle choices has no place in a public school.

This student may have summed it up the best:

Update: Noel’s suspension has been lifted. His principal, Dr. Stephanie Soliven, and Brevard Schools spokeswoman Michelle Irwin, deny Noel was suspended at all. Local 6 reports that the student’s referral slip noted that he “threatened to bring weapons to school.”

Correction: We previously had links to Facebook posts from Noel and his fellow students that we realized identified him and his real name. These were embedded, public posts, that we decided to delete.