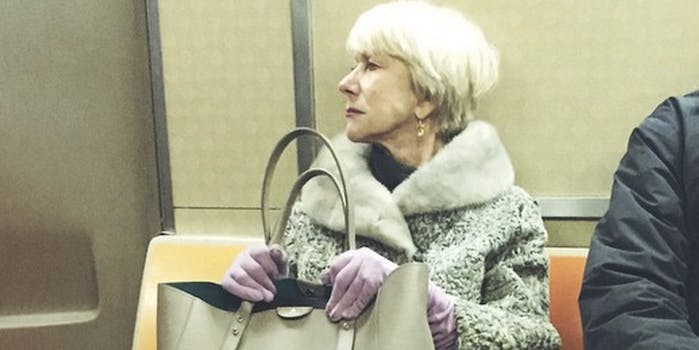 Helen Mirren rode the subway, and Instagram is freaking out about it

Look, we can all agree that Dame Helen Mirren is a national treasure. She’s sassy and classy and her breasts should probably be carved into the face of Mount Rushmore, right next to Teddy Roosevelt’s mustache. (Somehow, we don’t think he’d mind.)

But now that a photo of her riding the subway in New York City has gone viral, the response has been, shall we say, a little overly effusive.

It all started when Instagram user Jason Lowe uploaded a candid photo of a woman who looked to be Mirren riding the subway across from him last week.

Now, is it super ethical to get all up in a celebrity’s grill and take a photo of them without their permission, especially when they’re just trying to ride the subway like the rest of us and get from Point A to Point B without getting groped or kicked in the face by a busker? That’s up for debate.

Putting that question aside for a second, the photo immediately went viral, with people lavishing praise on Mirren for not “manspreading” (i.e., spreading her legs so another passenger couldn’t sit next to her) and exemplifying ideal subway etiquette.

“Even though there is clearly ample space around her, Mirren has her bag on her lap, and she is not weird about sitting next to another human being,” E. Alex Jung of Vulture wrote, adding that Mirren’s “coat game is. On. Point.”

Apparently, Mirren has a history of charming the pants off fellow MTA passengers, as Twitter is brimming with breathless stories from subway riders who were #blessed to see La Mirren in the flesh:

I just want everyone to know that today I sat next to Helen Mirren on a train, and it was so awesome that I forgot to say hi… or breathe.

Thurs nite: saw helen mirren n subway sta @ 14th/8th ave & had chance 2 tell her that I love her wrk. THIS is 1 of the reasons I heart NYC

While it’s great to see an older lady actress like Mirren get some social media love—and while I agree with Jung that her coat game is on point—it’s a little weird to see an Oscar winner receiving so many accolades simply for sitting like a human being while using public transportation.

It kinda makes you think for a second: If not behaving like a total mungus on the subway is the new standard for public etiquette, then don’t you think we’re setting the bar just a little low?