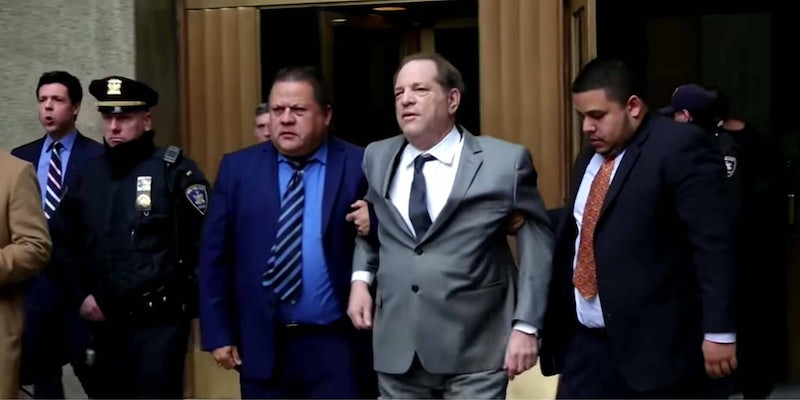 The results come shortly after the convicted rapist was sentenced to 23 years in prison.

The convicted rapist had been recently transferred from New York City’s Rikers Island, which is currently experiencing an outbreak within its walls.

Weinstein, who is now being held in the Wende Correctional Facility, has been placed in medical isolation, according to the Niagara Gazette.

The 68-year-old producer is currently serving a 23-year sentence for rape and sexual assault.

Representatives for New York State’s Department of Corrections declined to confirm the story, citing policies that bar them from commenting “on an individual’s medical record.”

“You’re telling me Harvey Weinstein has been sentenced to 23 years in prison AND contracted Coronavirus in the SAME WEEK?” @AgeofTM said.

Some even celebrated the virus and thanked it for infecting the serial rapist.

Others questioned why Weinstein was able to receive a test while countless everyday Americans struggle to get one of their own.

“I have a friend who’s pregnant & has symptoms. She tested negative for Flu & Strep but can’t get a test for coronavirus,” Twitter user @GrassrootsSpeak said. ” BUT HARVEY WEINSTEIN GOT A TEST?!?”

Conservative commentator Matt Walsh pushed back on some of the celebration, however, arguing that if the incident was the result of karma, many innocent people had to be harmed in the process.

“Harvey Weinstein has coronavirus. Some people are saying this is ‘karma,'” Walsh wrote. “Well if this global pandemic is just karma’s way of getting Harvey Weinstein, I’d like to suggest that karma take a more surgical approach to these matters in the future.”

Reports of Weinstein’s situation came on the same day that Sen. Rand Paul (R-Ky.) revealed that he had tested positive for the coronavirus as well.

The number of confirmed cases globally reached 335,972 on Sunday. At least 14,632 individuals have lost their lives as a result of the disease.