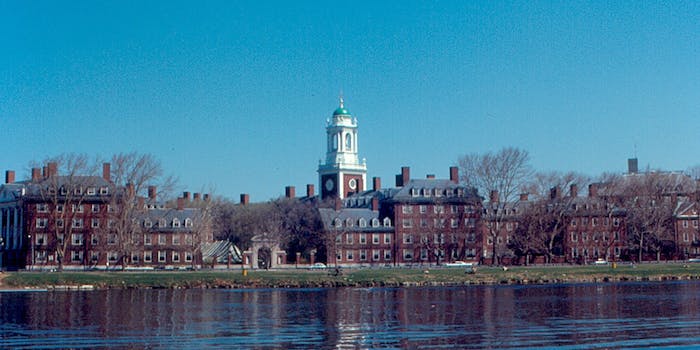 Four students–two of whom are Black–were anonymously sent hateful messages.

A student group at Harvard Law School is calling out the university’s alleged lack of action in addressing racist and sexist anonymous messages that some of its students received.

Four students–two of whom are Black–separately received hateful emails and text messages over the past seven months, according to a statement released by the Harvard Black Law Students Association (HBLSA).

Some of the anonymous messages read, “We all hate u … at least you help with the curve,” and “you know you don’t belong here…youre just here because of affirmative action.”

Update 4:10pm CT, July 29: The case was then investigated by the university police, information technology officials, and an outside law firm–in what Harvard called “extensive measures” in a statement given to the Daily Dot. The investigating entities could not determine who was sending the messages.

“Sadly, the realities of technology sometimes permit those who commit such acts to evade detection. We share our students’ disappointment and frustration that we were unable to identify who is responsible despite our efforts along multiple fronts,” a Harvard Law School spokesperson wrote.

Harvard assured the four victims that they would be able to review the investigation’s findings–no matter the outcome, according to the group. The school is now allegedly backtracking on that promise.

“For reasons of student privacy and confidentiality reflected in federal law and HLS practice, Harvard Law School will not publicly disclose details of investigations,” Marcia Sells, the dean of students, wrote in the statement. “This practice is designed to protect the respective rights of all parties involved in any investigation.”

HBLSA says the institution “woefully failed to act and protect the students,” and that it only protects its marginalized students when demands are “backed by external pressure.”

“Now, more than seven months since the first hateful message was sent, the sender of this message remains unidentified and free to continue harassing Black and women students, meanwhile the targeted students have been left to continue fearing for their safety,” the group wrote.

This story has been updated to include an official statement from Harvard Law School.