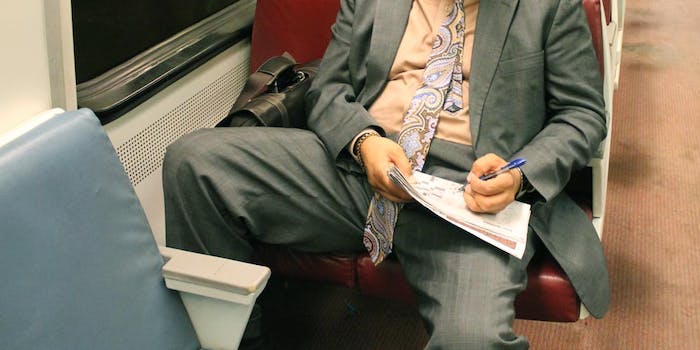 The creator of the chair received rape threats and unsolicited dick pics.

Anyone who has ever shared seated public space with men has probably encountered “manspreading.” The act, in which men ignore unspoken courtesies and exceed their allotted space by rudely spreading their legs–thereby taking up more than one seat or invading the personal space of those seated next to them–has become so common that it became a word in the Oxford Dictionary in 2015.

Could the answer to manspreading be not to teach men better behavior, but to fashion a chair that makes the spreading of men’s legs more difficult?

That’s what 23-year-old University of Brighton student Laila Laurel set out to explore with a project for her 3D craft and design program. Laurel designed a chair that physically stops men from letting it all hang out.

For her ingenuity, Laurel was awarded the Belmond Award for emerging talent in the design industry, which seeks to recognize imaginative and cleverly presented ideas.

Good news from the @NewDesigners showcase in London – our 3D Design and Craft student Laila Laurel has won the Belmond Award for her work 'A Solution for Man Spreading'.

Laila will now be comissioned to design a product for one of @Belmond's properties. Well done Laila! pic.twitter.com/C9W1zAaLW0

In addition, she also created a female version of the chair which encourages women to take up more space, defying typical social constructs. The idea behind her project was to challenge the way both men and women think, opening a dialogue in the process.

Unfortunately, the conversation she hoped to inspire quickly went south when “men’s rights” yahoos heard about the chair and started attacking her online. Laurel was forced to make her Instagram account private after receiving rape threats and unsolicited dick pics.

“Has she forgotten that we have something between our legs that stops us from closing [them] comfortably?” wrote one outraged manspreader.

Laurel’s art project made its way to the r/DankMemes subreddit where dudes patted themselves on the back for really giving her the business through memes.

Has she even seen a real chair before? from dankmemes

You know this is the truth from memes

Okay what the actual heck from dankmemes

Change my mind from dankmemes

We have problems too from dankmemes

Maybe men should just close their dang legs in public in the first place, and women wouldn’t have to create chairs to solve the problem.