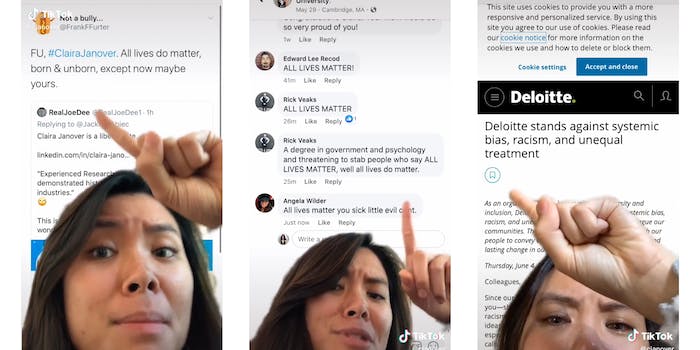 'I know this is what Trump supporters wanted.'

A recent Ivy League graduate revealed she lost her job over the backlash from a viral TikTok in which she threatened to “stab” anyone who argued “All Lives Matter” in response to Black Lives Matter.

Claira Janover graduated from Harvard in May with a degree in government and psychology. She had accepted a job at U.K.-based accounting firm Deloitte as a “government and public business service analyst,” per the New York Post. On Tuesday, Janover announced in two tearful TikToks that the company had fired her for the previous video.

“I know this is what Trump supporters wanted,” Janover said, adding that Deloitte fired her “even though they claim to stand against systematic bias, racism, and unequal treatment.”

Janover has devoted many of her TikToks to supporting Black Lives Matter, slamming President Donald Trump, and talking about issues like defunding the police.  In the original controversial video, posted on June 5, she slammed Black Lives Matter critics and jokingly threatened to stab them.

“The next person who has the sheer nerve, the sheer entitled caucasity to say, ‘All lives matter,’ I’ma stab you,” Janover said. “I’ma stab you, and while you’re struggling and bleeding out, I’ma show you my paper cut and say, ‘My cut matters, too.’”

The video accumulated nearly 50,000 views, while some of Janover’s other TikToks have received upwards of a million plays. She incurred the wrath of conservatives after far-right trolls and pundits like Jack Posobiec and Ann Coulter shared her post.

“I have gotten death threats, rape threats, violent threats,” Janover said in her second video from Tuesday. “It was OK, but now my future’s entirely compromised because Trump supporters have decided to come for my life.”

Despite the immediate consequences of her posts, Janover doesn’t plan to stop advocating for social justice.

“I’m too strong for any of you ‘All Lives Matter,’ racist Trump supporters,” she said. “It sucks, but it doesn’t suck as much as systemic racism. And I’m not gonna stop using my platform to advocate for it.”