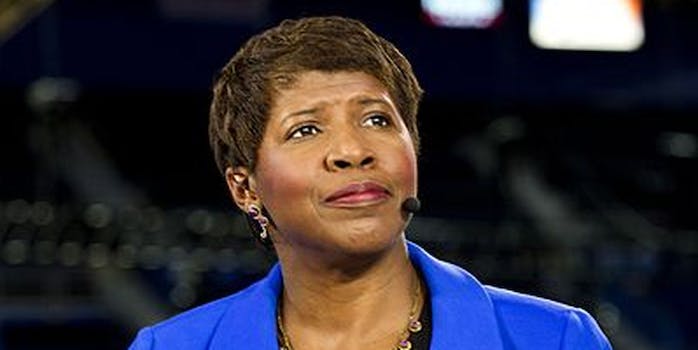 The PBS 'NewsHour' host was role model to many women and black people in media.

Award-winning journalist Gwen Ifill, who helped pave the way for black and female journalists, has died today at age 61. According to her employer PBS NewsHour, Ifill died of cancer.

Born in New York City and the daughter of a preacher, Ifill started her career reporting for Baltimore and Boston papers in the late 1970s—a time when there were few women or black people covering politics in the newsroom. She eventually moved on to the Washington Post, the New York Times, and NBC News, and was currently the moderator for PBS’s Washington Week and the co-anchor of the station’s NewsHour. Most recently, she and fellow NewsHour co-anchor Judy Woodruff moderated a Democratic Primary debate between Hillary Clinton and Bernie Sanders.

Many online, both journalists and fans, are paying tribute to Ifill, who was one of the first black journalists to ever anchor a political news show.

Gwen Ifill was a role model to me and to every woman, especially black women who took up the calling of journalism. Honored to have met her. pic.twitter.com/agHfA1aIQV

Ms. Ifill was a grandmaster of impartiality, but I'll never forget her face after the GOP response to an Obama SOTU. https://t.co/weFoHxhe7O

Very sad to hear about the death of @GwenIfill. She was a stellar journalist who mentored me and opened doors for so many journalists. RIP. pic.twitter.com/w87EifWLNY

So saddened to learn that Gwen Ifill has passed away far too soon. She was an icon for women in journalism — definitely for me

Very dark day when the rise of a white supremacist media mogul is followed by the death of Gwen Ifill. Media: Hire more women of color. Now.