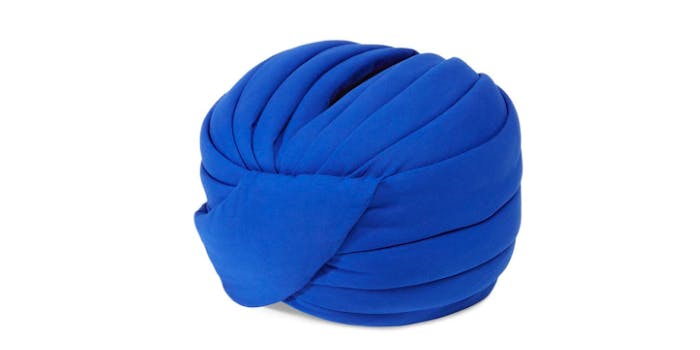 This was not the first time the brand culturally appropriated Sikh religious attire.

Gucci and Nordstrom are facing backlash for selling a Sikh turban for almost $800.

Named “Indy Full Turban,” the headpiece was described on Nordstrom’s site as “a gorgeously crafted turban” that’s “ready to turn heads while keeping you in comfort as well as trademark style.”

There are layers of issues with Gucci’s product—from it being sold at an obnoxiously high price, to fetishizing a religious symbol, to neglecting the hate the Sikh community often faces for wearing the attire.

One of the reasons Sikhs wear turbans is to promote equality. It is insulting to first simplify our religion into a fashion accessory and secondly sell it for hundreds of dollars. The wrap of the turban is done in Sikhi style, this is not cultural but #ReligiousAppropriation.

@gucci, who made the decision to capitalize on something so significant to Sikhs? And your team went as far as telling people how to accessorize for a "night on the town". You don't use a turban to add "pop of blue" in your outfit.

Dear @gucci, the Sikh Turban is not a hot new accessory for white models but an article of faith for practising Sikhs. Your models have used Turbans as ‘hats’ whereas practising Sikhs tie them neatly fold-by-fold. Using fake Sikhs/Turbans is worse than selling fake Gucci products pic.twitter.com/sOaKgNmgwR

This is beyond aggravating. Did someone at @gucci even bother to figure out what a dastaar (turban) means to Sikhs? Did it cross your minds to consider the history behind our identity? My people are discriminated against, even killed, for wearing a turban. pic.twitter.com/G62edSmjhf

The Sikh community faces nonstop discrimination in the U.S. In 2012, a white supremacist walked into a Sikh temple in Oak Creek, Wisconsin, and killed seven worshippers in one of the gravest hate crimes against Sikhs in the country.

Many Sikhs, who wear the turban, continue to be othered, which is why the commodification of the turban, which is used by hate mongers to identify Sikhs, is especially offensive to the community.

Nordstrom tweeted an apology early Thursday: “We have decided to stop carrying this product and have removed it from the site. It was never our intent to disrespect this religious and cultural symbol. We sincerely apologize to anyone who may have been offended by this.”

Gucci, meanwhile, has yet to respond.

We have decided to stop carrying this product and have removed it from the site. It was never our intent to disrespect this religious and cultural symbol. We sincerely apologize to anyone who may have been offended by this.

But it doesn’t change the fact that Gucci previously ignored similar complaints after putting turbans on white models at the 2018 Milan Fashion Week. The company also faced severe backlash in February over a “blackface” sweater.

Like, how can a company really apologize and say that they don’t “mean to offend” when they keep doing the same thing…over…and over…

You idiots should have talked to someone who wears one (I.e. Sikhs) about it before making fools of yourselves.

Lol that’s the best you got!? People need to be fired for this mess!

The turban was listed as “sold out” on Nordstrom’s website as of Thursday morning.