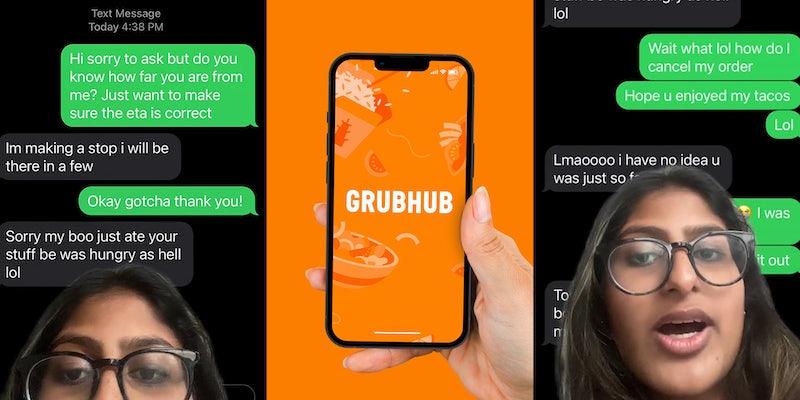 'I'm glad I funded your birthday dinner with you and your boo.'

A customer went viral on TikTok after sharing a text exchange with her Grubhub driver who allegedly ate her Taco Bell order.

The video features user @ihitrockbottom as she recounts the story with screenshots of their messages.

The TikToker says that after waiting over an hour for her food, she reached out to her driver. The driver claimed she “had to make a stop” beforehand, but that she would “be there in a few.”

Another twenty minutes later, @ihitrockbottom receives a text from the driver, who claims her significant other ate the TikToker’s food because he was “hungry as hell.”

“So, obviously, I was upset,” @ihitrockbottom says, “but I didn’t want to make a scene. So I respond, ‘Wait what lol how do I cancel my order. hope u enjoyed my tacos.'”

The driver responded, claiming that she wasn’t sure how to cancel the order, adding that the TikToker was too far. “Is it not your job to deliver food?” @ihitrockbottom asks in the video. “Whatever.”

While she told the driver she was hungry and sent her several crying emojis, the TikToker said she would find a way to cancel the order without the driver’s help, handling it “like a champ.”

“I’ll just take it up with Grubhub. I’m not going to get my tacos anyway,” she explains in the video.

However, the driver sent her another message. “Today is my birthday I’m bored asf need plans for me and bae,” the Grubhub driver wrote.

“Did she like, want me to give her plans?” @ihitrockbottom asks viewers. She then wished the driver a happy birthday.

The customer notes that she did file a complaint with Grubhub and received both a 10% coupon and a full refund on her Taco Bell order.

“Grubhub driver, if you see this, I hope you have had an amazing birthday,” the TikToker concludes in the video. “And I hope you enjoyed my Crunchwrap Supreme meal with my large Pepsi, and I’m glad I funded your birthday dinner with you and your boo.”

The video has amassed over 305,000 views as of Tuesday, with viewers in the comments commending @ihitrockbottom for her kindness.

“I wish I was as kind as you,” one viewer said.

“OMG you are wayyyy too nice – that driver should be fired,” a second stated.

“i don’t think many people woul’ve handle it like that. i need to learn to channel your zen energy,” a third wrote.

Other people shared how they would’ve reacted if they were in her shoes.

“Yeah I would have lost my mind,” a second commented.

“Girl you’re too nice I would’ve had her fired,” a third shared.

The Daily Dot reached out to @ihitrockbottom via TikTok comment.

Update 6:51pm CT Oct. 5: In an email to the Daily Dot, a Grubhub representative claimed the company offered @ihitrockbottom an additional $50 gift card for her good sportsmanship.

“We work hard to bring the best experience possible to our diners, but in those cases when things don’t go as planned, we encourage diners to contact our Customer Care team so that we can make it right,” they said. “This diner did just that, and we refunded her order and gave her a discount to use towards her next order. Because she was such a great sport about this less-than-ideal experience, we were also able to connect with her and send her a $50 gift card. We’re continuing to investigate and won’t hesitate to take more action about the incident as we learn more.”