LGBT political allies are not standing for the attack against Democrat Angie Craig.

Angie Craig is a congressional candidate from the Twin Cities area of Minnesota, running to represent the state’s 2nd District. Craig, a Democrat and former hospital executive, is seeking a seat that has been held by a soon-retiring Republican for 14 years.

Craig’s campaign has drawn national attention, largely because the 2nd District is a vital swing vote. Former presidential candidate Martin O’Malley has traveled from Maryland to Minnesota just to campaign for Craig, and the Democratic Party is banking on her to win back the suburban Minneapolis-St. Paul voting bloc.

Craig is also a lesbian. And her opponents fighting for Republican candidate Jason Lewis are using the fact that she’s married to a woman—rather than her ability to govern—to try to discredit her among voters.

According to the Victory Fund, an LGBT political action group, Minnesota GOP Communications Chair Vickie Froelich posted Craig’s family photo to Facebook on Friday, alongside the heterosexual families of her opponents, in order to shame her. 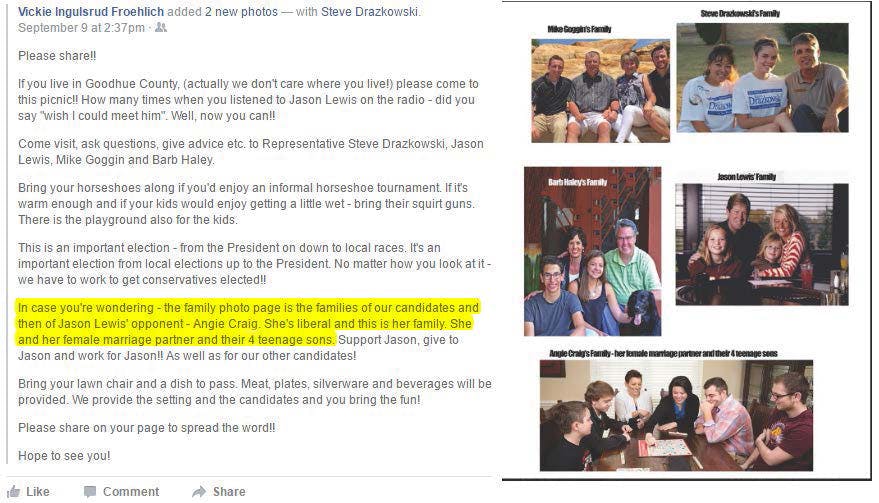 Screengrab via the Victory Fund

The photos—as if to illustrate the lesbian apocalypse looming in the case of Craig’s election—appeared in an advertisement for Republican candidate Jason Lewis’s meet-and-greet.

In case you’re wondering – the family photo page is the families of our candidates and then of Jason Lewis’ opponent – Angie Craig. She’s liberal and this is her family. She and her female marriage partner and their 4 teenage sons.

Craig is openly gay and has not attempted to hide her wife and four sons during the campaign—in fact, family photos grace her website and Twitter frequently. But Froelich’s post implied that voters should be horrified by the Democrat’s family status nonetheless.

“Hate and bigotry seem to follow Jason Lewis wherever he goes, so it is unsurprising Angie Craig’s family photo was used to attack her and LGBT families,” said Moodie-Mills in an email to the Daily Dot. “He has disparaged young women as ‘non-thinking’ because they support choice and marriage equality, suggested immigrants destroy white culture, and even implied that slavery should be legal.”

The Victory Fund, which is endorsing Craig, said that her campaign is not currently commenting on the opposition’s use of her family photos.

“Jason Lewis is the antithesis of Minnesota values,” Moodie-Mills continued. “And I expect voters will reject his campaign of bigotry and fear by electing Angie Craig in November.”

In a September 2 article, the Nation referred to Lewis as a “mini-Trump.” Lewis’s career as a right-wing radio host has become the subject of intense scrutiny during his campaign—scrutiny that has revealed past statements sure to shock Democrats and Republicans alike.

As the Nation—and Moodie-Mills—pointed out, Lewis has said that the government shouldn’t be able to tell people they can’t own slaves. He also believes the white race is under threat of extinction because of a high Latino birth rate, and in a August 2015 podcast stressed the importance of identifying black men as criminals, saying repeatedly, “White lives matter” and “All lives matter” in response to a planned Black Lives Matter protest.

Beth Shipp, executive director of lesbian political action group LPAC (which endorsed Craig), also compared Lewis to Trump and said that both candidates use language that inspires their constituents to bigotry.

“Jason Lewis’s supporter wins the ‘how low can you go’ award with the hateful and homophobic Facebook post that ridicules and mocks a family because it doesn’t look like the 1950s version of family that conservatives like her expect from politicians,” said Shipp in an email to the Daily Dot. “Minnesota’s voters recognize this ‘dog whistle’ as the blatant homophobic and hateful attempt that it is against two incredible mothers and the wonderful boys they are raising.”

Shipp said that Lewis should denounce the attack post, but it appears unlikely that he will.

In fact, homophobic rhetoric against Craig could be a last-ditch attempt to add a few conservative voters to what may be a dying race. As the Nation reported the first week of September, Craig’s robust campaign for the 2nd District seat in Congress has already raised $2.5 million. Jason Lewis’s campaign? Just $370,000.