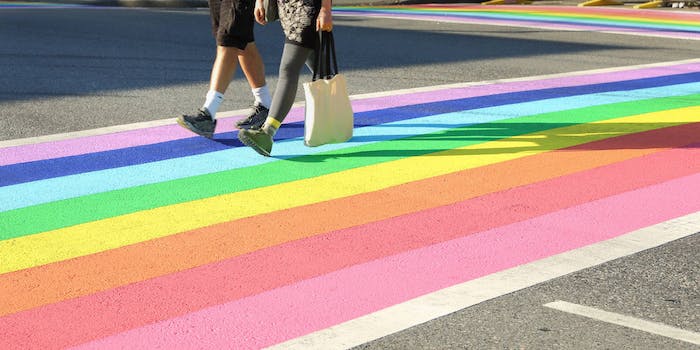 After a few LGBT pride festivals, a certain burnout can settle in. They’re crowded, it’s hot, the combination of midday sun and plentiful cocktails can lead to some cranky dehydration.

Rejoice, ye crowd-fearing, introvert gays! For now, you can attend any pride parade in the world—without actually getting out of bed.

The result is an immersive experience that allows viewers to ride on floats festooned with flags, DJs, and drag queens; to march in parades next to real people from LGBT communities worldwide; to stand under a giant moving rainbow flag; or to dance along to a marching band made up of lesbian drummers.

The VR effects work best when used with the Google cardboard or YouTube 360 platforms and accessories, but you can also use a mouse to move around the panorama from a regular browser as well.

A map published on the Google blog shows all of the countries where virtual marches or parades were filmed: including Tel Aviv, Singapore, South Africa, South Korea, Brazil, India, and multiple cities across the U.S. and Europe.

On its blogs, Google said the #PrideForEveryone campaign was designed to allow people without access to LGBT festivals and events to participate, noting that homosexuality is still illegal in over 70 countries around the world under penalties of imprisonment or death. OK, so it’s not just for lazy American queers—which makes it even cooler and more monumental.

“Around the world, many lesbian, gay, bisexual, transgender and queer people do not have equal rights and are not free to express themselves,” reads the Google #PrideForEveryone statement online. “Even in countries with legal equality, many LGBTQ people face discrimination or violence for being themselves.

“As LGBTQ rights are challenged around the world, it’s more important than ever to send a strong message of support and to stand up for equality and free expression for everyone,” said Google. “Let’s bring pride to those who cannot march.”