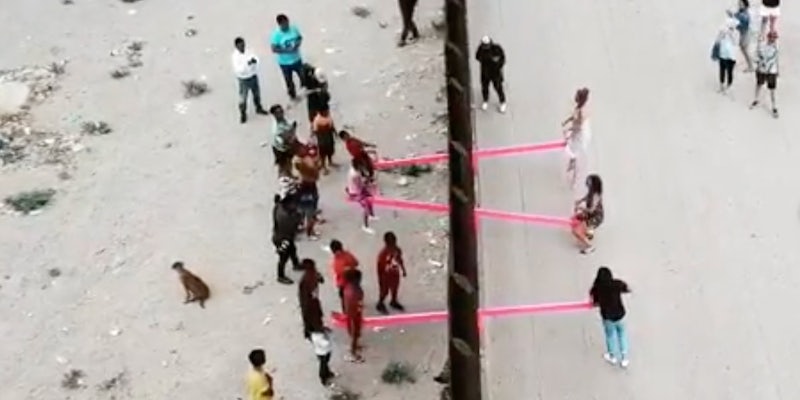 Seesaw installation along U.S.-Mexico border is both heartwarming and sad

Children on both sides of the border get to play together.

Two architects installed three pink seesaws along the U.S.-Mexico border so that children from both sides could play with each other in harmony.

The architects behind the installation, Ronald Rael and Virginia San Fratello, shared videos and photos on Instagram of their creation being used.

One of the most incredible experiences of my and @vasfsf’s career bringing to life the conceptual drawings of the Teetertotter Wall from 2009 in an event filled with joy, excitement, and togetherness at the borderwall. The wall became a literal fulcrum for U.S. – Mexico relations and children and adults were connected in meaningful ways on both sides with the recognition that the actions that take place on one side have a direct consequence on the other side. Amazing thanks to everyone who made this event possible like Omar Rios @colectivo.chopeke for collaborating with us, the guys at Taller Herrería in #CiudadJuarez for their fine craftsmanship, @anateresafernandez for encouragement and support, and everyone who showed up on both sides including the beautiful families from Colonia Anapra, and @kerrydoyle2010, @kateggreen , @ersela_kripa , @stphn_mllr , @wakawaffles, @chris_inabox and many others (you know who you are). #raelsanfratello #borderwallasarchitecture #teetertotterwall #seesaw #subibaja

The project was conceptualized in 2009, but its materialization takes on a new meaning in 2019, as many are now likening the conditions of modern-day migrant detention centers to those of Nazi concentration camps in the ’30s.

“The wall became a literal fulcrum for U.S.-Mexico relations and children and adults were connected in meaningful ways on both sides with the recognition that the actions that take place on one side have a direct consequence on the other side,” Rael wrote on Instagram.

Rael said that the event of children playing on the seesaws was “filled with joy, excitement, and togetherness at the border wall,” and “one of the most incredible experiences” of his career.

Rael also shared an image of the “Teetertotter Wall” when it was only a conceptual drawing in 2009. Of course, the immigration debate wasn’t as intense back then.

Even though many dubbed former President Barack Obama the “deporter in chief,” as a recent CNN analysis explains, context is everything. Not only did the Obama administration deport fewer people than previous administrations, but it also focused on those with a criminal history and newly arrived immigrants, as opposed to President Donald Trump’s administration which seems to target each and every non-European immigrant–including families and children.

Many think that children coming together to play on the seesaw installation is heartwarming while the reality of the situation is sad.

“Sweet and sad both at the same time..at least for a littl [sic] while, they are happy,” wrote one user on Instagram.

The Daily Dot has reached out to Ronald Rael.