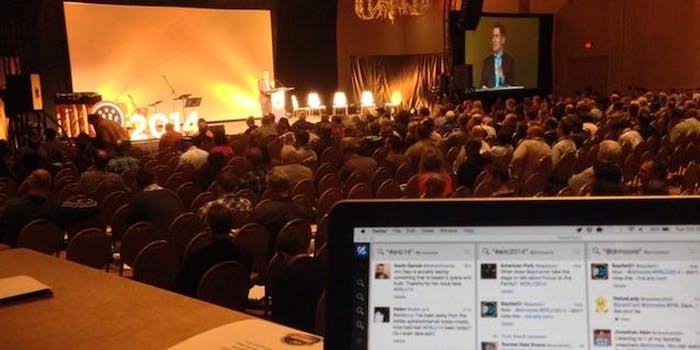 A Southern Baptist conference on "homosexuality and the future of marriage" met with intense criticism from the LGBTQ community on Twitter.

“The Gospel, Homosexuality, and the Future of Marriage” may sound like a terrible name for an event, but to the Southern Baptist Convention, the largest protestant denomination in the U.S., it’s just another case of doing the Lord’s work.

Wednesday was the last day of the first annual conference of the SBC’s Ethics & Religious Liberty Commission (ERLC), a three-day onslaught against equality for gay and trans individuals.

The SBC has been protesting the gay-rights movement on a national scale since the 1990s, with most of its vitriol aimed at gay marriage. With more and more states legalizing gay marriage by popular vote or court order, the SBC is grappling with the need to advance its own tactics. If it wants to win what its leaders call the war on traditional marriage, it will need to up its homophobia game. Speaking at the conference about “ministering in a post-marriage culture,” SBC seminary president Rev. Albert Mohler said he hoped the event would be “the right kind of conversation.”

The conversation looked significantly different on Twitter. Voices that were shut out of the conference—particularly the voices of gay, bisexual, and transgender men and women—weighed in online by following the conference’s livestream and reacting on social media. While the echo chamber of Baptist theology (they’re “in” the world but not “of” the world) meant that the conference featured very little real debate, Twitter played host to a truly robust discussion. The democraticizing effect of the social network led to interesting dichotomies, like LGBTQ followers blasting the conference for not allowing them to participate and conference attendees in turn blasting Twitter users for criticizing the conference when they weren’t even there:

It’s unfortunate to see all the #ERLC2014 bashing coming from people who aren’t here. Adding to the divide they claim to be abhorrent.

@CrisGarrido_DR As a progressive christian I vehemently disagree. They are perpetuating a theology of fear #ELRC2014

LGBT people watching the live feed and weighing in on #ERLC2014 are not “trolls.” They have no other voice in this conversation.

Everyone from noted opponents of the SBC to beloved Christian idols has spoken out against the church’s anti-gay stance, and the organization, which didn’t renounce slavery or segregation until 1995, has found itself on the outskirts of the cultural dialog about LGBTQ rights. Still, attendance at the ELRC convention, which adjourned Wednesday morning, was over capacity.

Gone are the days when the SBC could launch a national boycott of Disney for its gay-friendly theme park days simply by handing out flyers to local churches. Its anti-gay rhetoric now operates in a real-time interactive sphere which it cannot control. On Monday, when the crowd gave a standing ovation to a florist who refused to sell flowers to her long-time gay client on the occasion of his marriage, the moment was instantly Vined and greeted with scorn around the Internet.

#lovethyneighbor We are called to love everyone #ERLC2014 what a contradiction from the message about the florist. Was that loving?

There were a few surprising moments during the conference. Mohler declared on Monday that ex-gay conversion therapy was ineffective, a major step that distanced the church from the “pray the gay away” mentality. Other conference speakers included a man and woman who declared they had previously practiced homosexuality, as well as a representative from a therapy service that counseled gay and lesbian Christians who were in straight marriages.

The sanctity of heterosexual marriage remained the conference’s overall focus, although there were a few moments when the agenda veered toward what many onlookers refused to call “love.” One notable moment featured an attorney for an anti-gay lobby declaring that the murder of Matthew Shepherd, which paved the way for widespread hate-crime legislation in the U.S., was a false “narrative” created by “the homosexual agenda.”

If you say the “story of Matthew Shepard’s murder was faked b/c #GAYAGENDA,” you really take pathetic to new levels https://t.co/96Ne5cyFl6

The conference also featured a widely-condemned lecture by guest speaker Denny Burk on transgender issues. Despite acknowledging that intersex individuals exist, Burk insisted that God had only created two genders.

Decades of research on trans identities. @DennyBurk‘s only authority: “God made us man and woman.” Sad and dangerous. #ERLC2014

And despite the alarmingly high suicide rate among trans teens—more than half of whom attempt to kill themselves by age 20—Burk urged parents to “lovingly” reject their trans children’s “choice,” calling the issue one of “gender discipling.”

@emily_esque #ERLC2014 made it clear: do not accept the identity of your trans child. Even if this results in suicide 57% of the time

@aarbaer @DennyBurk For what? None of this helps transgender people. Just reinforces mental health harm. This is dangerous. #ERLC2014

There were other moments of inconsistency during the conference as well, at least as seen from the outside.

And the SBC wonders why it’s lost members for seven straight years. Try focusing on something Jesus actually talked about. #ERLC2014 #fb

The SBC has long prioritized what it calls the “homosexual agenda’s” attack on traditional marriage, and with the audience for the conference skewing young, it’s clear the message is having at least some impact. But it’s also clear that for many people, including progressive Christians, the message is outdated.

“What if we’re not the culture warriors we think we are?” asked speaker Russell Moore on the conference’s second night. “What if we are instead slow motion sex revolutionaries who are 10 to 20 years behind the culture?”

It was one of the conference’s few instances of wry self-awareness. And Moore’s follow-up made it clear that if the SBC knows how it looks to outsiders, it’s willing to risk that bigotry now for salvation later.

“What do we have to be afraid of? We may be misunderstood. We may be marginalized. But Jesus of Nazareth is alive. We have not been left behind.”

The data, however, suggest otherwise.

#ERLC2014 This is why, in the long run, you will lose: pic.twitter.com/XwLBSRORKd