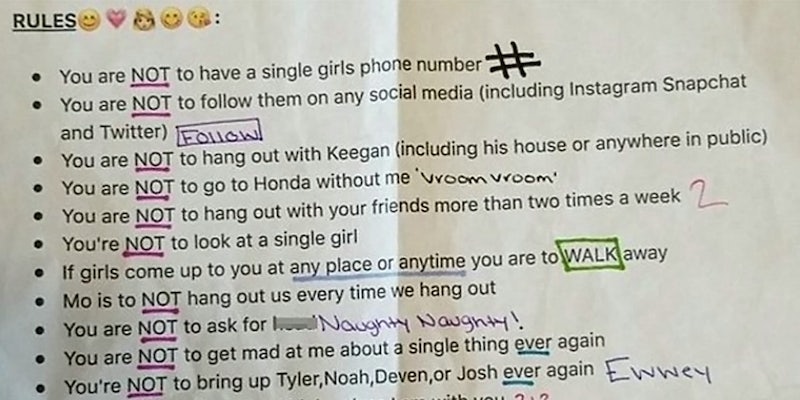 Some see a ridiculous list, but it may point to something more sinister.

A list of 22 rules a woman wrote out for her boyfriend has some folks laughing, but it may be a glimpse into an abusive relationship.

In a now-deleted tweet—which apparently goes back to 2017 but is going viral again—someone who purchased a used car posted a piece of paper he found inside with a list of relationship rules. “You are NOT to have a single girls phone number” states the first rule, with the NOT underlined in purple pen. This proceeds a demand not to follow any girls on social media.

The sprinkling of emojis and colorful inks throughout the list give it an outward appearance of a cute “honey-do” sort of thing, and the rules are so unreasonable, many are finding it funny. But there is nothing adorable about the demands the girlfriend is making.

BREAKING NEWS: 'You are not to LOOK at a single girl and you must tell me you love me once a day': Girlfriend's bizarre list of strict rules for her boyfriend goes viral. The list demands 22 things her boyfriend can't do such as not taking longer than 10-minutes to text her back. pic.twitter.com/USIUJUYiep

This girlfriend’s “rules” can be used as an introduction to the National Domestic Violence Hotline’s list of red flags. For example, one of the red flags of emotional abuse is “monitoring where you go, who you call and who you spend time with.” Sixteen of the girlfriend’s 22 rules fit this description.

The rules don’t just demonstrate an obsessive, dangerous jealousy over other women. They also explicitly name several friends of the boyfriend who he is no longer allowed to hang out with. One rule even bans speaking of some friends, saying, “You are NOT to bring up Tyler, Noah, Deven, or Josh ever again.” This kind of jealousy over friendship, and isolating a person from their friends, are also signs of emotional abuse. It creates an environment where the person has no one to turn to for help or support. As the number of people a person can talk to about their relationship lessens, the ability the abuser has to control and hurt their partner increases.

When you see the control in a relationship laid out as plainly as rule seven—“If girls come up to you at any place or anytime you are to WALK away”—it can seem too ridiculous to be real. It’s an impossible request, how could anyone ask that of their partner? But emotional abuse is full of impossible requests and expectations and subsequent punishment. If you have any doubt how serious this really is, look no further than rule 16: “If I catch you around girls I kill you.”