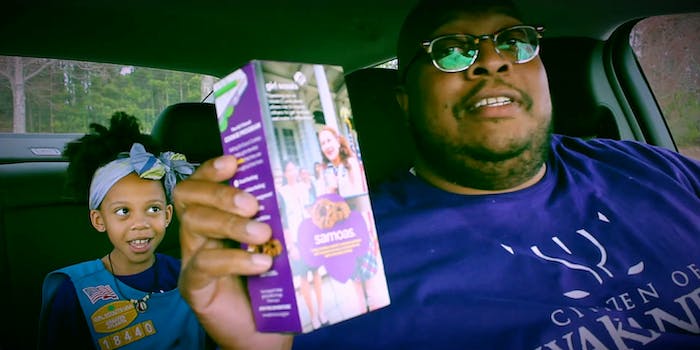 Girl Scout cookie season is in full swing and tweens around the country are getting creative to sell the most boxes of Thin Mints in their troop.

One scout, Charity Harrison, and her father Seymore have taken the internet by storm with the most adorable Girl Scout cookie sales pitch yet.

In a video posted to Facebook, the father-daughter duo hailing from Duluth, Georgia, sing a Girl Scout cookie version of Childish Gambino’s “Redbone.”

“Thin Mints, you wanna order some before it’s too late,” Charity sings as she snaps along to the beat. “We also got Trefoils and they taste great. Tagalongs will make you feel fine.”

Seymore told a local NBC affiliate that the video has received nothing but love since he posted it on Feb. 17.

“Everyone talks about how cute Charity is and how they like the way she’s snapping in the video,” Seymore said. “People like the fact that a father is involved with the Girl Scouts and selling the cookies. Girl Scout moms have been reaching out about how much they like having ‘cookie dads’ around.”

Charity initially set her sights on selling 1,300 boxes of cookies this season, according to the NBC affiliate. With the help of her video, she’s already sold over 1,600 boxes so she upped her goal to 2,500.