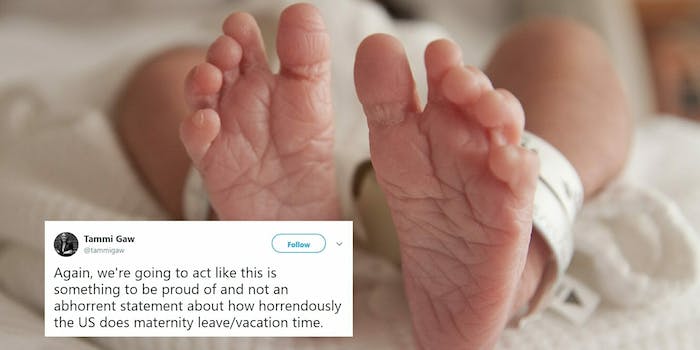 We shouldn't have to do this.

A Good Morning America article sent shock waves through Twitter yesterday after it revealed that a hot, new trend is donating personal vacation time to pregnant coworkers for their otherwise barely-existent maternity leave.

“It really, really meant a lot to me… I was extremely appreciative and very humbled.”

The article told the story of Angela Hughes, an employee at a private university in Kansas City, Missouri, who was less than a year into her job when she gave birth two months early. Because she hadn’t been there long enough, Hughes was not allowed paid maternity leave, forcing her to work every day of her pregnancy so she could have vacation time after her daughter was born.

She was afforded eight weeks of paid maternity leave after her boss and coworkers donated their own paid time to the new mother.

Despite the seemingly heartwarming gesture, many Twitter users were not impressed.

“I’m all about supporting women, but this isn’t a feel-good story! It’s actually fucked up that workers give up their own benefits to make up for what employers aren’t providing because the US is the only industrialized nation without paid family leave,” Andrea González-Ramírez, a writer for Refinery29, wrote on Twitter.

How fucked up is our country that we now expect people to give up their already paltry vacation time to make up for our lack of decent maternity leave, and somehow paint it as "trendy"?

THIS IS ACTUALLY TERRIBLE

Out of 41 industrialized nations, the United States is the black sheep, as it doesn’t guarantee mothers paid maternity leave at all, according to 2016 data from the Organization for Economic Cooperation and Development.

The U.S. Department of Labor dictates that under the Family and Medical Leave Act, eligible employees are given up to 12 weeks of unpaid, job-protected leave per year. Employees are eligible for leave if they have worked for their employer at least 1,250 hours in a one-year period, and work at a location where the company employs 50 or more employees within 75 miles.
Even more messed up: Any time taken off due to pregnancy complications count against the 12 weeks.

Individual employers and governments can choose to allow employees to donate their time off, but the policies vary widely. Only five states— California, New Jersey, Rhode Island, New York, and Arkansas—currently offer paid family and medical leave, according to the National Conference of State Legislatures.

No it's not generous. It perpetuates corporate cruelty. All does is put the employer's responsibility onto the shoulders of workers who feel they need to band together to protect the health and wellbeing of their colleagues. Workers' rights are human rights. https://t.co/Q5EXzREHmr

So, props to the kind coworkers donating to their paid vacation time to new parents. But ultimately, they shouldn’t have to.