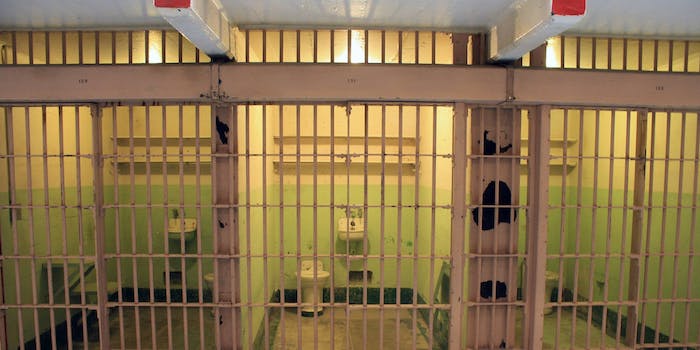 Where the boy ended up may be worse.

On March 30, Demetria “Dee Dee” Harris was shocked to see photos of her son online, badly beaten, and wearing a leash around his neck.

Cortez Berry got in trouble when he was just 14, landing in a youth facility with charges of theft and assault. A probation violation at 17 got him sent off to Burruss Correction Training Facility in Forsyth, Ga., where the beating and photos took place sometime around the end of March.

On Monday, the Georgia Department of Corrections announced that two supervising officers at the prison had resigned after being involved in the incident.

The department’s spokesperson did not respond to multiple requests for comment.

“I blame prison officials for my rape as much as I blame the men who assaulted me.”

In a July 2014 report titled “The Crisis of Violence In Georgia’s Prisons,” the Southern Center for Human Rights (SCHR) found that “prisoners have access to a steady supply of cellphones and smartphones.” The report also found that many cell door locks were broken, lethal weapons were frequently smuggled into prisons, and “gangs have filled a security vacuum.”

Just a few days before the Berry beating photos surfaced, an investigative report by NBC News found that 13,500 cellphones had been confiscated in Georgia prisons in 2014.

The Peach State isn’t the only one with severe violence facing teen inmates in adult prisons. The issue has become a focal point of prison reform across the country over the past couple of years.

Adolescent inmates are five times as likely to be sexually assaulted when sent to adult prisons and 36 times more likely to commit suicide when housed in adult populations.

Particularly high rates in New York prompted the state to produce videos that instruct inmates on how to avoid getting sexually assaulted behind bars. In one video, director TJ Parsell describes the gang rape at the hands of adult men that occurred when he was only 17, a violent assault that took place within 24 hours of his arrival. Parsell described the assault in all of its horrifying detail in an essay for the anti-prison-rape nonprofit Just Detention.

“I blame prison officials for my rape as much as I blame the men who assaulted me,” Parsell wrote in the Just Detention testimony. “They created and shaped the environment, both actively and through their negligence, in which I was gagged, effectively silenced and unable to resist. Ultimately, the attitudes and prejudices of correction officials contribute to an atmosphere that fosters rape behavior.”

Parsell described the attack as part of a larger plan that is frequently applied to new, and young, inmates. Injured in a gang attack, the newbies are “broken down” and made more pliable to the demands of other inmates.

Berry’s aunt, Shavondria Wright, told Augusta’s News12 that she visited him shortly after the photos of his beating circulated online. What he told her in many ways echoed the experience of Parsell; but rather than a rape, Berry said he was beaten for refusing to join the gang Gangster Disciples.

“Ten people jumped on him and just kept beating him and they choked him to sleep. Pretty much they left him there for dead,” Wright told News12.

On Wednesday, the family held a vigil outside of the prison.

The DOJ also released a 79-page report detailing the abuses of adolescent inmates at the hands of Riker’s guards, finding that overuse of force by staff resulted in 1,057 injuries in a population with only 682 youth.

On April 2, Augusta’s News12 reported that Berry’s mother, Demetria Harris, was in touch with Rev. Al Sharpton and that the National Action Network had helped her find an attorney to work on securing Berry’s release.

“Representatives from our Atlanta office met with the family and will report back to him during our convention this week,” NAN spokesperson Jacky Johnson told the Daily Dot in an email. She said that Sharpton hadn’t been involved yet but will be learning more about the case during the group’s annual convention this week in New York.

In the meantime, Berry has been moved twice. First, he was moved from Burruss to Smith State—one of the top three most violent and dangerous Georgia prisons, according to the SCHR report. After his family protested, he was moved again and now remains in custody at the high-security Macon State. Harris told News12 that her son is currently in solitary confinement, remaining in his cell for 23 hours each day.

Photo via miss_millions/Flickr (CC BY 2.0)