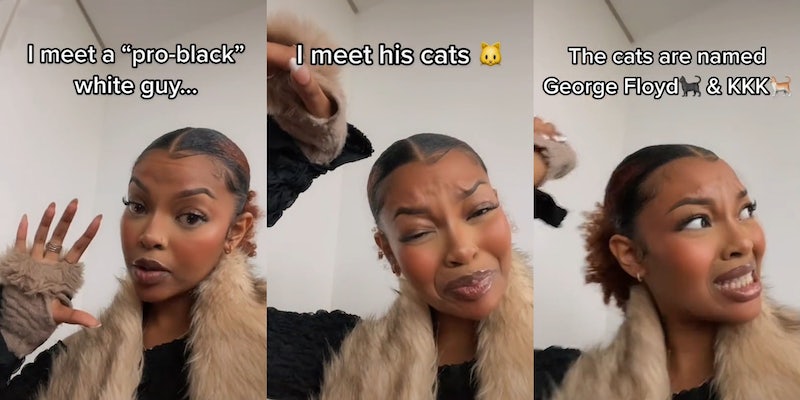 ‘What would possess him to do that?’: Woman says date’s cats are named KKK and George Floyd

"We all know what happened in 'Get Out' and I was scared it was gonna happen to me."

A TikTok exposing her “pro Black” date’s family cat names has gone viral, with the video amassing over 400,000 views.

The video, posted by user @rosanasty is set to the viral “I take the ball… bounce it” trend on the app, which is designed for users to discuss “fails” and unexpected situations.

The user reveals in the TikTok that her date initially appeared to be a “pro-Black white guy,” but then discovered his family member’s cats were named after George Floyd—a Black man murdered by a police officer in 2020—and notorious anti-Black hate group the KKK.

She then revealed more information about her date in a follow-up TikTok, which led to several commenters comparing her experience to Get Out: A horror movie in which a Black man is hunted by his girlfriend and her white family upon visiting them for the first time.

In the follow-up video, she reveals she “reconnected” with the man after initially meeting him as a teenager. After going on a few dates, the user explained that the man picked her up from work one day and said they had to stop off at his uncle’s house at Stouffville before going out.

“Mind you, Stouffville is like basically 45 minutes to an hour north of Scarborough where I lived at the time,” she said. “So if I was going to Stouffville, there was no way for me to really get back to Scarborough because there’s not a lot of transportation.”

While she drive was “fine,” the user said she “immediately” got this weird feeling upon arriving at the uncle’s house because it was like “a very cottagey type home.”

She continued, “That was a really weird greeting. Like, why are you so shocked? Because I’m fucking Black?”

The first “red flag” the user noticed was the talk show of conservative influencer Candace Owens playing on the TV. Then, the 15-year-old cousin comes into the room and suggests she, the user, and her date go on a walk, which the user agrees to.

“So we start going on this walk, it’s really beautiful. But tell me why, every two seconds in conversation, the N-word was popping out of both of their mouths and I hadn’t never heard it come out of his mouth prior to this. So I’m like, ‘What the fuck is going on?'”

She continued, “I don’t want to say anything because I had just watched Get Out, and we all know what happened in Get Out. I was scared was gonna happen to me. So I’m just holding my breath.”

Upon returning to the house, the user said the uncle went on the “biggest rant” about how there was no racism in the ’80s, at which point she asked to be driven home. “I told him I just want to, like, go home,” she said. “I didn’t want to go on a date anymore.”

The user did not immediately respond to the Daily Dot’s request for comment via Instagram direct messages.