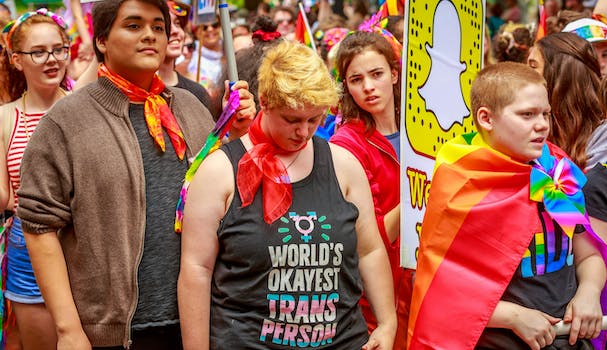 The future is fluid: Generation Z’s approach to gender and sexuality is indeed revolutionary

Most teens do not identify as 'completely heterosexual' and know someone who is nonbinary.

Whenever a new generation comes of age, it inevitably ends up getting scrutinized by those who came before. Just look at how millennials have been derided for killing romance, sex, and the entire democratic system. If you believe everything you read, it’s like this generation is single-handedly out to destroy all that is holy in America, leaving nothing behind for posterity.

But death leads to new life, and from the ashes of the American Dream (which millennials have also killed), the younger Generation Z appears to have discovered a bevy of new social norms—especially in regards to gender and sexuality.

Also called the iGeneration, Generation Z is loosely defined as anyone born between the mid-1990s and the mid-2000s (aka ages 7 to 22). Growing up in the shadow of what is now the largest living American generation, Generation Z inevitably took a lot of inspiration from millennials. But as this group of young Americans become teenagers, even certified legal-drinking adults, one defining feature experts are starting to notice is the iGen’s tendency to view gender and sexuality as something on a spectrum, not just simply male or female, or gay or straight.

Lily-Rose Depp, Johnny Depp’s 18-year-old daughter and an actor in her own right, has said, “You don’t have to label your sexuality; so many kids these days are not labeling their sexuality and I think that’s so cool.” At 19 years old, Jaden Smith told GQ Style, “I feel like people are kind of confused about gender norms. I feel like people don’t really get it. I’m not saying that I get it, I’m just saying that I’ve never seen any distinction.”

For these Gen Zers, fluidity isn’t reactionary like it was (and still is) for millennials; now, it’s closer to the norm.

In fact, a 2016 survey by the consumer insight agency J. Walter Thompson Innovation Group found that only 48 percent of Generation Z identifies as “completely heterosexual,” compared to 65 percent of millennials. And over half of these young Americans reported knowing someone who goes by non-traditional gender pronouns like “they/them,” making this generation the only demographic where that is the case.

The iGeneration, as its name suggests, is unique because its members were the first to be born in the post-dot-com bubble world. While Generation X, baby boomers, and even older millennials will wax poetic about life before the internet took over, Gen Z doesn’t even know what that looks like. And although being constantly connected to the web can be very problematic at times, it has also gifted this generation with a level of exposure to different worldviews that was previously unheard of.

“We grew up in a time when the internet opened the doors of the world—literally—and allowed us to talk to someone on the other side of the globe in a matter of seconds,” Sean Dolan, a 19-year-old who grew up in the Chicago suburbs and now lives in Austin, told the Daily Dot. “The internet generation, as I’ve heard us referred to, has never experienced what it is like to not feel connected to every piece of information in the world at any time.”

Not only does the internet open up doors to different views of gender and sexuality, but it also allows for members of Gen Z to find other people who feel the same way that they do. Today, online communities like those found on Tumblr and in private Facebook groups are there to show support even when nobody is physically there to do so.

“Nowadays, I feel like kids are way more open about talking about sexuality, and making it more mainstream through use of social media and new forms of technology,” Madeline Dolinsky, a 20-year-old Chicago native told the Daily Dot. “People can freely express who they are and feel comfortable knowing they have a larger community around them who supports them.”

According to a 2013 study by the Gay, Lesbian, and Straight Education Network, LGBTQ teens are online for an average of 45 minutes longer than straight, cisgender teens. And while only 19 percent of these straight, cisgender teens reported making friends online, half of the LGBTQ survey respondents said that they did have a close friend they met online.

This doesn’t come as a surprise for Michael Bronski, a professor in the women, gender, and sexuality department at Harvard University. In the 16 years that Bronski has been teaching, he has witnessed first hand how internet communities have shaped his students.

“I can remember a moment at Dartmouth, maybe 2007, when the freshman class showed up and because Facebook had just been invented, many gay or lesbian students as freshmen came and they already knew each other,” Bronski told the Daily Dot. “It was this amazing thing where the first LGBT meeting was completely packed because they were all friends already. Well, they were virtual friends.”

And that was 10 years ago, when social media was just starting to become a part of mainstream culture. Now, the iGen often goes to these virtual communities first to learn about gender and sexuality, regardless of whether they’re actively looking for fellow LGBTQ teens or just trying to procrastinate homework.

“Even in the past five years, I think I’ve seen more of an openness and open-mindedness about talking about stuff,” Bronski said. “You don’t have to go to the library to look up in the card catalog books that have ‘gay’ in the title anymore—you can do it on your iPhone that your mother left you with when you were 10.”

In other words, the internet can give queer teens what real-life surroundings cannot. For Dolan, growing up in what he refers to as “the conservative suburbs of Chicago,” it was hard for him to be open about his sexuality. Only when he went off to college and found himself surrounded by other people his own age did he gain the confidence to come out to his family. And when he did come out, he found that his parents were supportive, but not necessarily as understanding as his fellow Gen Zers.

“I had this idea all the way up until college that I would never come out to my parents, except for when I [told] them that I got married to another man,” Dolan said. “It wasn’t until I finally summoned up the courage to call them and tell them that their first reaction was, ‘Honey, we know.’ I still feel that, although they have been accepting when I talk about it at home, it is a borderline don’t-ask, don’t-tell situation.”

Dolan’s family experience shows that America won’t seamlessly become a fluid utopia when iGen takes over. While Gen Xers like Dolan’s parents might be more open to gays and lesbians than Baby Boomers are, sexuality is still predominantly seen as a black-or-white concept among them. The term “sexual fluidity” didn’t even enter the mainstream vernacular until psychologist Lisa M. Diamond wrote a book on the subject in 2008.

Gender fluidity, meanwhile, is an even more recent concept in pop culture. Only in the last few years have people come under fire for using the derogatory term “tranny.” And for some Gen Zers, the reality of living life outside of the binary is still far from perfect.

Nikolai Tarsinov is a 20-year-old transgender man currently living in Boston who identifies as pansexual. He often notices a discrepancy between how open his generation thinks it is in regards to fluidity, versus how open it actually is.

“My friend group is almost all heterosexual and cisgender. If I’m being completely honest, they are a lot less open-minded than they think they are,” Nikolai said. “The same people who proudly declare themselves progressives and allies will offhandedly make comments about how I’m not a ‘real’ guy.”

This also might have to do with maturity—teenagers can be mean and they’re hardly masters of nuance. But it also shows that this generation is teetering on the precipice of a major breakthrough. It’s going to take more than celebrities endorsing fluidity, however, to make long-term, noticeable changes to how America perceives gender and sexual identities. The million-dollar question now is whether or not Generation Z is ready to commit to those changes.

“I would never belittle the progress society has made. Just over the course of my short life, I have seen queerness go from something to make fun of to something that’s tentatively accepted,” Tarsinov said. “We are a lot more progressive than any generation that has come before us, but there is a lot more work to be done before society gets to a place where all people can be comfortable with their sexuality.”

It can be hard to predict trends in an entire generation’s worldviews, especially when dealing with a group as young as Generation Z. It can be even more difficult to try and sum up an entire generation’s views on a topic as complex as gender or sexuality. And let’s get one thing clear: Generation Z probably won’t be the group to completely rid the world of sexual and gender binaries.

With that said, this generation is onto something. It will be interesting to see how gender and sexual norms change as the iGen continues to grow up and enter the “real world”—whatever that means.