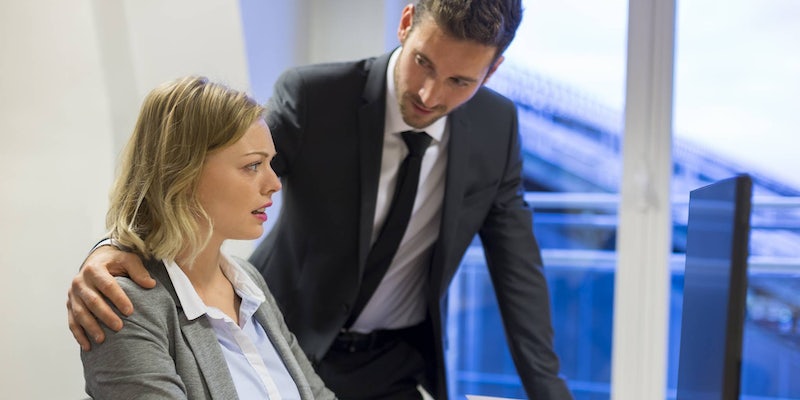 A survey done by Forbes has produced shocking results about gender inequality in the workplace. Would you believe that nearly half of the men surveyed (44 percent) believe inequality doesn’t exist? But the majority of women (77 percent) think it does? Wonder why?

According to the survey, men were also more likely to believe there was already a proactive plan in place to combat gender inequality and that by just being themselves at work, women will be able to get the career they want. (Geez, why are we wasting time practicing professional behaviors and boundaries then!) Men also think that their companies have fair maternity leave policies (though, who knows if they even know what those policies are). “In virtually every case, men seem to be much less aware of gender bias issues than women,” says Forbes.

Hmmm, could it be because the American workplace—and all the traits we traditionally value with being a good worker and leader—are associated with men? Or traits that, in fact, women are punished for exuding in the workplace? Could it be that men have a harder time seeing gender bias since they are less likely to be victims of it? Nah, it’s probably just women complaining.

In another survey, 29 percent of men said they hope to reach the CEO level in their current industry, whereas just 11 percent of women said the same thing. Instead, the largest number of women (21 percent) hoped to get to the director level. Though Forbes notes that the men surveyed may be closer to actually attaining those higher job titles, the “more somber but probably more likely explanation is that women look to the top of companies in the industry and realize that the CEO spots are dominated by men, and this influences their responses.”

Statistics vary over how many women have faced discrimination or sexual harassment in the workplace. A 2011 ABC News poll said one in four women have experienced workplace sexual harassment, and a survey from Cosmopolitan last year put that number at one in three. But, you know, according to the possible future First Family of our country, a strong woman “wouldn’t allow herself to be subjected to that.”