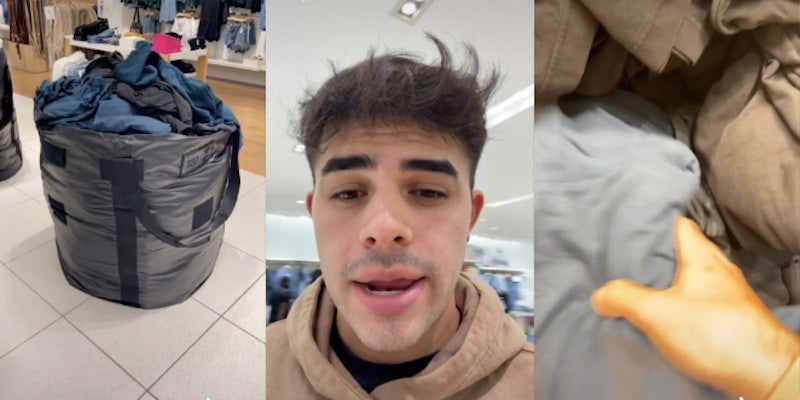 ‘The staff said they’re not allowed to put them on hangers’: Gap customers have to search through ‘trash bags’ for Yeezy collection

'It’s bc we’re poor and he has to remind us that we can only afford clothes from the trash.'

A Gap customer went viral on TikTok after sharing the unique display for the clothing brand’s new Yeezy collection.

While at a Gap store in Garden City, NY, user Nick Ryan (@nck.ryn) explains that Kanye West’s Yeezy brand has partnered with Gap for a collection, but he found something odd about where it was placed. Then he shifts the camera to show dozens of large black bags filled to the brim with clothes.

“Currently at Gap and they have the Yeezy Kanye collection and I find it so weird he makes you go through trash bags to find what you’re looking for,” Ryan says.

Ryan explains how in order to find what one is looking for, customers have to sit there and search through the bags. In the caption, he claims the workers told him, “they’re not allowed to put them on hangers.”

In an email to the Daily Dot, Ryan added that the employees said the Yeezy brand specifically requested that the clothes be displayed in bags.

@nck.ryn the staff said they’re not allowed to put them on hangers 😭 #gap #yeezy #kanye #yeezygap #DoritosDareToBeBurned ♬ Love You So – The King Khan & BBQ Show

The video has garnered 1 million views since it was posted on Aug. 18. Many viewers in the comments section theorized why Ye wanted his clothes sold in trash bags.

“My follows him pretty close and says he does this to help reduce plastic waste. There’s no tags or stickers on any items and the bags are reusable,” one user claimed.

“I read it was meant to double as an art installation focused on homelessness. I’ll give it to him, he always has a vision,” a second stated.

Others jokingly shared other reasonings for the display.

“It’s bc we’re poor and he has to remind us that we can only afford clothes from the trash,” one viewer quipped.

A Yeezy spokesperson clarified to Fox News that the collection is sold in construction bags, not “trash bags.”

Earlier this month, however, West took to Instagram to call out Gap in now-deleted posts. He claimed the brand stole his designs and held meetings without him, per NME.

The Daily Dot reached out to Gap via email.