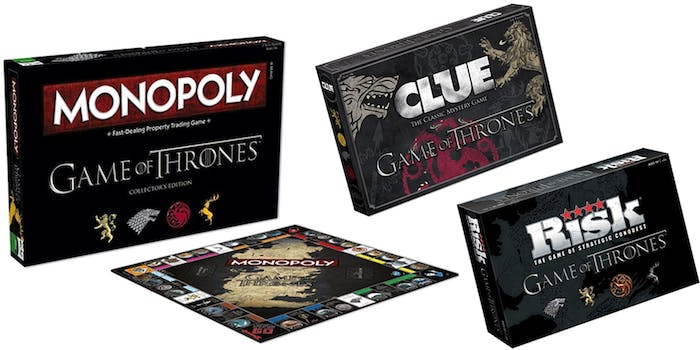 ‘Game of Thrones’ board games are 25 percent off

When you play the game of thrones, you win or you die, or you do not pass Go.

Game of Thrones fans have a very long way to Season 7, so they might as well stay entertained in the meantime. Several best-selling Game of Thrones board games are up to 25 percent off on Amazon right now.

The Game of Thrones versions of Monopoly, Risk, and Clue are included in the sale, as well as the official HBO card game. Prices start as low as $20.95.

You can save anywhere from $9 to $20, while the deals and supplies last. Check out all the discounted games up for grabs here.

Kill timey-wimey with the ‘Doctor Who’ tumbling tower game

Get the complete ‘Harry Potter’ book collection for 43 percent off