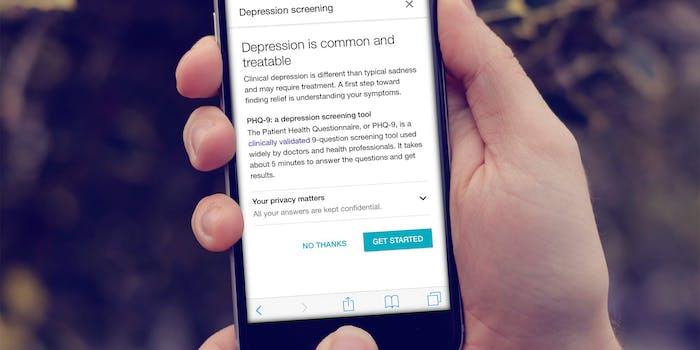 Next time you Google ‘clinical depression,’ prepare to take a quiz about your symptoms

Feeling blue? Google is phasing in a short quiz users can take to figure out if they’re facing depression.

In a partnership between Google and the National Alliance on Mental Illness (NAMI), American Google users who search for “clinical depression” on tablets and smartphones will receive a five-minute quiz that checks for clinical depression in the user.

The quiz uses PHQ-9, a clinically backed questionnaire commonly administered by medical professionals to test for depression. The quiz asks respondents questions about their sleeping habits, appetite, and their ability to concentrate on given tasks, among other things. At the end of the quiz, users are given a score on the PHQ-9 score, indicating their depression’s intensity and how to find help.

In a Google Blog post from NAMI CEO Mary Giliberti, NAMI and Google explore the test’s clinical backing, explaining how it can help users have a “more informed conversation” with their doctors about their mental health.

“Statistics show that those who have symptoms of depression experience an average of a 6-8 year delay in getting treatment after the onset of symptoms,” Giliberti wrote in the post. “We believe that awareness of depression can help empower and educate you, enabling quicker access to treatment.”

Both organizations also see the test as an opportunity to spread awareness, using Google as a platform to reach more people with depression.

“We hope that by making this information available on Google, more people will become aware of depression and seek treatment to recover and improve their quality of life,” Giliberti explained.

Interested Google users can take the test through a medical infographic on mobile devices. It remains unclear if other mental illnesses will receive their own questionnaires in the near future or if non-U.S. residents will soon receive the quiz.