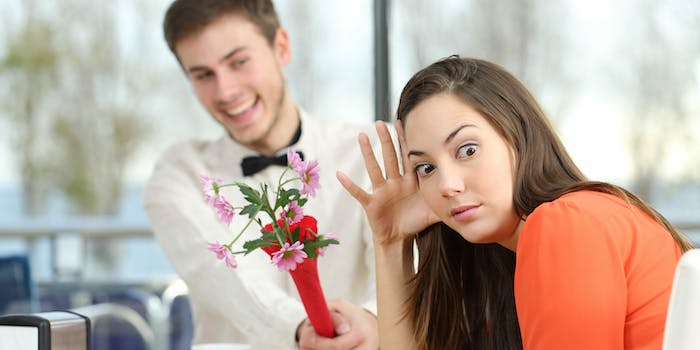 Hell hath no fury like a man driven to prove that the “Friend Zone” exists, and that it’s sending our planet on a path of miserable, baby-free extinction.

Perhaps you didn't have enough bullshit in your life. I'M HERE TO HELP. pic.twitter.com/2Lg06nMlV2

On Tuesday, this piece of internet gold began floating around social media, catching the attention of rational humans who thought, “Wow, this is trash, and should be treated as such.” What I’m referring to is a column for conservative site the Federalist on why men and women can never, under no circumstances, ever be friends, and how the friend zone is the reason for the United States’ declining birth rate.

this is correct – if a man tries to be friends with me I will make him carry all my shopping bags and walk 3 feet behind me and my boyfriend pic.twitter.com/ig9MHuZaIh

In the post, writer Hans Fiene argues that in order to rescue the world from extinction, women just need to realize that our male friends would rather be real friends with guys they can watch football with while sitting in their own filth. Men aren’t actually friends with women, sillies, they just want to bone us! Therefore, Fiene writes, all witche- I mean, women must relinquish men from our seductive wiles if we have no desire to put them on the “express track to Marriage Zone.” Then, once we do find a man we want to marry and be impregnated by, we must get on that track ASAFP—because c’mon, ladies, the stabilization of the human race is at stake!!!

“Being caught in the Friend Zone is an inarguable drag on fertility rates, as a man who spends several years pledging his heart to a woman who will never have his children is also a man who most likely won’t procreate with anyone else during that time of incarceration,” Fiene dramatically writes. “Quite simply, for the sake of our future, the Friend Zone must be destroyed. For the Friend Zone to be destroyed, women must accept the following truths: you don’t have any guy friends and, in fact, you can’t have any guy friends.“

So what should us women do if, say, we find ourselves hopelessly repulsed by our male (not) friends and don’t want to birth their children for the sake of laughs, singing, and tax benefits? Well, we apologize for our inconvenience, of course. This is, like most matters involving women, our fault.

“Do your ‘friend’ a solid and let him go. Call him up and tell him, ‘…It was my fault that I got your hopes up by putting you in the Friend Zone. As restitution, please accept the phone numbers of five girls I know who find you attractive. Stop wasting your time with me and go hang out with a girl who might one day bear your children.'”

Yes, the piece is mansplaining fantasy garbage that exudes the tone of someone who has never interacted with actual men, let alone is one. He has instead only watched beer commercials from the ’80s and read Tucker Max books and thinks men love to fart Taco Bell into in other men’s faces and call people “turd blossoms.” Men like blowing things up with fireworks, Fiene writes. They definitely aren’t complex humans who can experience platonic friendship, no way.

Above all else, Fiene’s general arguments are exhausted and played out, and might be worth being taken more offensively if they weren’t already demands and tropes women hear daily ad nauseam: Don’t lead a man on, because that would make you a slut. Don’t waste your prime baby birthing years, because that is the only way to lead a fulfilled life. Find a man to settle down with, because being alone is sad and lonely. Have children. Be a good wife. Be a good mother. Stop being so selfish and think about others for once!

To be told that we must take responsibility for tricking men into thinking we will one day have sex with them in exchange for friendship is, sadly, expected. However, when women follow through and turn down men and reject their advances, we face the very real danger of getting straight up murdered. Which, unsurprisingly, is probably our fault, too.

Let me tell it to Fiene, all my own male friends, and any man who has ever been friends, or is friends, or wants to be friends with a woman: Literally nothing is tethering you to being someone’s friend, and women owe you absolutely nothing in exchange for any time you wish to spend being someone’s friend. There is no friend zone stopping you from telling someone how you feel, and there is no affection, sex, or other reward to be reaped for being a decent person to someone else.

But if you feel like your genes are wasting away in a friendship that you expected to evolve into something more, then please, take that responsibility you wish to impose upon women and leave. Because, and maybe I’m just contradicting myself here, but Fiene, in this instance, is right: Women are not interested in being friends with such men, because these self-interested creeps are not friends—they’re controlling abusers who feel entitled to a woman’s time, affections, and bodies, but are worthy of none.