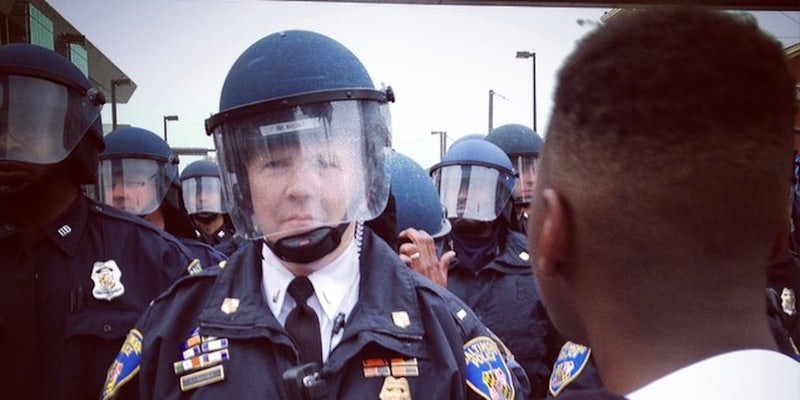 Thousands gather in Baltimore to protest the death of Freddie Gray

Social media continues to play a role in visualizing the racial tensions over police brutality.

Black America’s frustration and anger over racialized police brutality ratcheted up another notch in a post-Ferguson landscape last night, as major protests ground Baltimore to a halt over the death of Freddie Gray.

On April 19, a 25-year-old black man named Freddie Gray died in Baltimore, a week after police arrested him on April 12. Gray, who was not under suspicion for a crime at the time he fled authorities, ran because he feared a police beating, a friend told the Baltimore Sun. Cellphone video surfaced showing him screaming in pain as police dragged him to a waiting van without calling for medical assistance.

Gray was not under suspicion for a crime at the time of his arrest. After he saw police, he ran away from them, prompting the police to give chase. The six officers involved in Gray’s arrest were later suspended with pay. Although they claimed that they arrested him “without force,” Gray’s injuries at the time of his death included a severed spine and a smashed voice box.

The pastor at Empowerment Temple in Baltimore announces to parishioners that #FreddieGray has died. #March2Justice pic.twitter.com/P3gNTxX4yO

The Baltimore Sun reports that the city has paid millions over the last six years to settle lawsuits alleging extreme violence on the part of its police force. On Friday, Mayor Stephanie Rawlings-Blake described the police department’s handling of the arrest as “unacceptable.”

#FreddieGray was:
A. illegally stopped.
B. conscious entering the van.
C. unconscious leaving the van.
D. murdered by Baltimore police.

Social media played a major part in documenting last night’s events, including violence on both sides.

One video shows protests escalating as white bystanders throw objects back at the protestors and police attempt to get them to safety:

Baltimore caught between making history and living up to its reputation. #FreddieGray https://t.co/s4L1tsqT7d

Footage also showed police holding down and beating Baltimore photojournalist J.M. Giordano, who documented the incident along with the protests on his Instagram account:

At the #freddieGray protest. Check out the full gallery @citypaper #blacklivesmatter #baltimore #blackpower

Although media reports described the protests as chaotic, on Twitter, witnesses claimed that wasn’t the case, and many accounts showed peaceful protest.

RISE UP! It's our day/We doin this for #FreddieGray – outside Baltimore Police Dept demanding justice! #March2Justice pic.twitter.com/DFCJkjYJhG

Frustrated bystanders continued to point out double standards between the treatment of white suspects and their black counterparts, as well as the difference between the empowered police force and the protestors:

Dozens of arrests last night in Baltimore. None of the individuals were responsible for the death of #FreddieGray

They killed a man, but everyone be concerned about their damaged police cars. https://t.co/stOZyI8E6S #FreddieGray #Baltimore

Protestors outside of Baltimore also joined in support.

Just lost at least 5 friends to the riot in Baltimore. Not bc they were there, but bc of their dumbass opinions about it on FB. #FreddieGray

The Baltimore police department released additional footage of Gray’s arrest in anticipation of last night’s massive protest, but questions about the events surrounding his death remain. In the meantime, his death continues to unite the city.