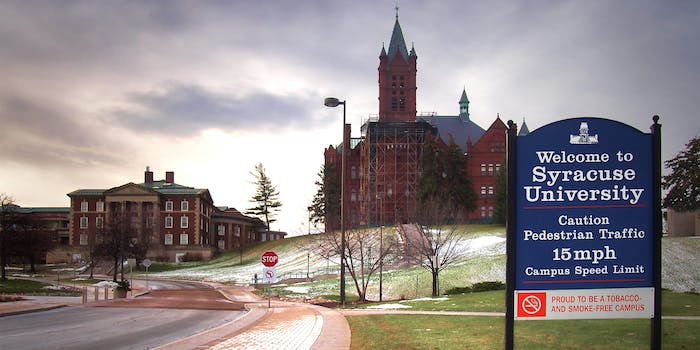 An alleged member made a pledge to always have 'hatred in my heart.'

An engineering fraternity at Syracuse University was suspended on Wednesday over a video the school chancellor called “extremely racist, anti-Semitic, homophobic, sexist, and hostile to people with disabilities,” according to the New York Times.

University officials were sent the video, and the school paper, the Daily Orange, published it on Wednesday after the school declined to release it pending an investigation. University Chancellor Kent Syverud said he was working to identify specific individuals and to take legal action.

“There is absolutely no place at Syracuse University for behavior or language that degrades any individual or group’s race, ethnicity, sexuality, gender identity, disability or religious beliefs,” Syverud wrote in an email to students and faculty, according to the Times. “Upon confirming Theta Tau’s involvement, the university’s Office of Student Rights and Responsibilities immediately suspended the fraternity, effectively halting all activities.”

Fraternities have not only come under fire for racist incidents in recent years, they have also been punished. Earlier this month, Callifornia Polytechnic State University’s Lambda Chi Alpha was suspended after a member was photographed in blackface.

Update 7:41am CT, April 21: Members of Theta Tau posted an apology online Friday, claiming the video was just a “skit” meant to “roast the active brothers” as part of the “new member process,” according to Vice.

This event was never intended to be centered around racism or hate. This year, one of these brothers is a conservative Republican, and the new members roasted him by playing the part of a racist conservative character. It was a satirical sketch of an uneducated, racist, homophobic, misogynist, sexist, ableist, and intolerant person. The young man playing the part of this character nor the young man being roasted do not hold any of the horrible views espoused as a part of that sketch.