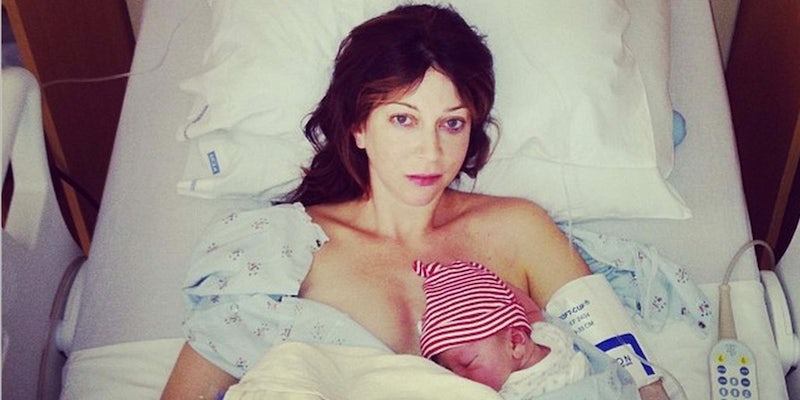 Mom banned for sharing birthing photos: Is Facebook a prude?

Is a naked body in the context of childbirth too provocative for social media?

A California woman had her Facebook account temporarily suspended after she broadcast her homebirth on the site, which she did via other social networks as well. Ruth Fowler, the new mother of a healthy son named Rye, is royally pissed off due to the banning (NSFW language follows):

Facebook have now banned me for posting “pornographic material”. I don’t know what cunt keeps reporting me but they can go fuck themselves.

While Fowler’s on the outs with Facebook, her posts didn’t receive the same treatment on Twitter and Instagram, where most are still up for the general public to see, although Fowler told me via email that Instagram had flagged and removed a few of images.

Leading up to her suspension, Facebook took down a picture of her cradling her baby in the nude after her birth.

You can see the banned image on Twitter (again, NSFW, probably):

our mum @fowlerruth who live-tweeted and instagrammed her home birth had this pic removed by Facebook. Is that OK? pic.twitter.com/Hu25InvpHn

Yes, it has nudity, but it’s not pornographic. This decision to suspend Fowler has many people upset over the impression that Facebook has lumped childbirth into a sexual category. And, as Betabeat pointed out, Facebook’s policies towards pornography and nudity differ, and it seems inconsistent that Facebook would be categorizing Fowler’s pictures as sexually explicit.

There are equally “risque” photos of Fowler still up on the Facebook-owned Instagram, where you can see her placenta and images of her breastfeeding Rye. It seems strange that Facebook would penalize the new mother while the other social network it owns would let her slide (especially considering how Instagram has treated other breastfeeding mothers in the past, and that Facebook says it allows breastfeeding photos that don’t show a full breast).

So what’s going on here? Is Facebook being unnecessarily prudish? Or is there a line that should be drawn when it comes to showing childbirth on social media?

There are two schools of thought about sharing details of childbirth on social media:

1) This is an event that’s still often shrouded in mystery and euphemism, and honest accounts are education and enriching. The more birth stuff, the better!

2) Because of its graphic nature re: the human body, posts detailing childbirth are inappropriate for social media. No graphic birth stuff!

I am in the first group in that I think people should be able to post details about childbirth on social media, including those that include blood and body parts, even though I avoid social media posts that give blow-by-blows of women’s experiences related to another, smaller human being ripping its way through their bodies and then feeding off them, because I am a wuss.

But even as I would like to use social media companies that believe the value of birthing pictures overrides their ick factor, it’s not like a platform is obliged to show photos they deem too graphic, especially since plenty of Facebook users do not want to see especially graphic imagery.

The decision to temporarily suspend Fowler’s profile was a result of Facebook’s position on nudity. While it doesn’t categorize the childbirth pictures as pornographic, the website does consider the nudity in some of the photos to be too graphic. I asked a Facebook spokesperson what exactly happened with Fowler’s case, and that’s what it boiled down to: the nudity in some of the pictures was deemed too much. “Our Community Standards limit the display of nudity on Facebook. This approach is consistent with standards that apply elsewhere, including television and print media,” the Facebook spokesperson explained.

This is problematic because it reinforces the idea that non-sexual images of women’s bodies are obscene, and it marginalizes a very common experience. It’s understandable that Facebook is trying to walk the line between allowing graphic content and preventing images that make its users uncomfortable, but in this case it seems that the company has drawn the line at post-pregnancy full frontal nudity.

Is it an appropriate line to draw? I’d like the company to be more relaxed about non-pornographic nudity, but perhaps I’m in the minority — let us know what you think in the comments.