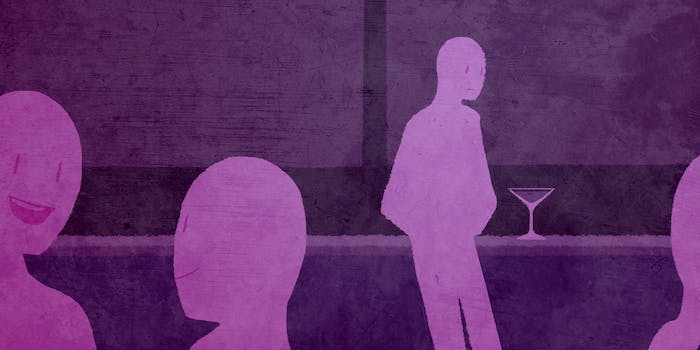 Facebook meme asks: Where was your first gay bar?

Whether LGBT or straight, gay bars are a special place for many of us.

It’s been less than one week since the world woke up to the horrifying Sunday news of a shooting massacre at the gay club Pulse in Orlando, Florida.

As the LGBT community in particular reels from the attack, social media has become a form of group therapy: a place for reflection, support, and expressing the fear and heartbreak triggered by the homophobic murder of 49 mostly Latino LGBT people.

On Friday, the reflection turned bittersweet as Facebook users began to share memories of their first visit to a gay bar—noting the impact that such vital centers of community and sanctuary have had on lives both LGBT and straight.

It began with a simple image (we aren’t sure who made it) that was passed around on Facebook, offering a prompt: Where was your first gay bar?

Soon, the image was shared thousands of times—as members of the LGBT community as well as straight friends and family shouted out the first gay bars they had ever visited.

Some of the posts were ripe with unforgettable stories. Others were all-too-familiar recollections of the magic felt when a young queer or trans person is immersed for the first time in a completely LGBT environment. For many, a first visit to a gay bar was the first step toward coming out.

(Note: Only Facebook posts set to “public” are used.)

Sometimes, a visit to the local gay bar was an extremely difficult and weighted choice to make. It wasn’t just a night out—it was often a terrifying step toward coming to terms with being a marginalized underclass. Many posts described “circling the block” outside of gay clubs dozens of times, weighing the risks and implications of going inside as if it were a door that, once opened, would never close again.

In more than one post, people recall visiting gay bars long before they were of legal age. Whether starting at 14 or 16, many in the LGBT community remarked that they snuck into their local gay club because the older queer folks understood that there was nowhere else safe for a queer teen to go.

As one Facebook user pointed out, gay bars have long been a favorite destination for straight women who wanted to go out dancing without having to fend off predatory men. Gay clubs were also a safe refuge for many young people who were straight but felt like outcasts for various reasons.

In more than one post, people expressed heart-wrenching feelings of guilt and sadness over the deaths of the 49 Orlando victims while many LGBT people around the country were at similar gay bars celebrating pride.

Still others tried to lighten the terrible events of the week with a touch of humor.

Whether it brings an opportunity to commiserate, to show solidarity with LGBT friends and family, or simply to stroll down memory lane, the “first gay bar” meme is a powerful statement about the importance of LGBT sanctuaries in a homophobic culture.

There’s a reason they’ve longed been referred to as “gay church.” Historically—and especially in the days before the internet—gay bars were the only places where LGBT people could present as their truest selves. Whether transgender, butch, femme, leather-clad, or in drag, the gay bar allowed us all to live momentarily without fear. With pride.