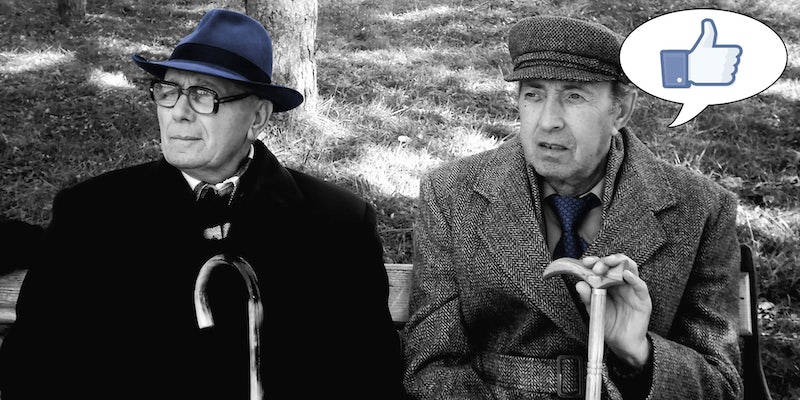 In every sense of the word, the biggest social network in the world is showing signs of old age.

Here’s a question I’ve been pondering lately, and I don’t think I’m alone: When will my personal journey with Facebook come to an end?

I was yanked into the modern Internet by a journalism professor, of all people. He’d insisted the whole class sign up for Facebook, which was still a very new phenomenon in 2005. As with most students in the mid-2000s, my life soon revolved around the site: parties, relationships, and friendships. Everything was on Facebook.

At the time, the network felt like a place just for my friends and me. But that’s since changed. I’m now Facebook friends with distant relatives and employers. The newsfeed, once a place to keep track of what my real friends were up to, is filling with ads. And more often than not, that little red notification icon up top is spamming me with application notifications, rather than actual communications from people I care about.

Facebook and the people who use it are getting older.

The demographic trends are unmistakable. Facebook is the third-oldest social platform, according to a report from analytics firm Pingdom last August. Only Yelp and LinkedIn had more older users. Once home solely to college kids, now less than 20 percent of Facebook users are 24 or younger. Meanwhile, the over-35 demographic accounts for more than 65 percent of the Facebook population. 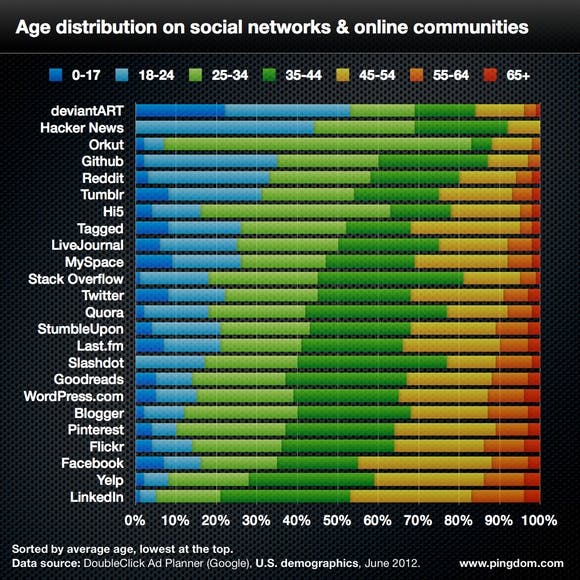 At the same time, rising networks like Tumblr and Reddit are killing it with young people; one in three users at both sites is 24 or younger.

Teens are migratory. They’re chasing after coolness. And Facebook isn’t hip anymore, according to Marcus Messner, an assistant professor in the Virginia Commonwealth University’s School of Mass Communication. Messner said many of his college students still use Facebook, if for no other reason than it’s “unavoidable.” But newer sites carry a lot more social cachet.

“For many of them Facebook has lost its cool to Tumblr and Instagram,” Messner told The Daily Dot.

According to Messner, while virtually everyone is still on Facebook, they may not be enjoying it as much. Parents and bosses are now peering over your shoulders. Today’s college kids may have grown up with Facebook, but they’ve also grown up with the idea that you have to be guarded about what you say on the site, because it’s not really just your friends listening in. Facebook has gone from a cool hangout with close friends to a family reunion combined with an office Christmas party. 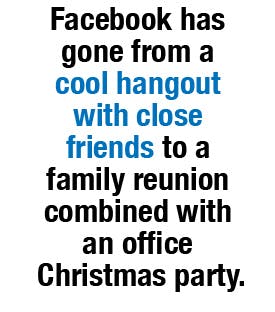 The generational mixing makes the network a little less enjoyable for everybody, said Jesse Stay, co-author of I’m On Facebook—Now What?

“The problem you’ll run into with older and younger audiences joining the mix is that what used to be ‘OK’ to share on these social networks is no longer such,” Stay told the Daily Dot.

Facebook’s business model makes clear the company doesn’t mind eschewing the hip factor for broad appeal—and revenue. Founder Mark Zuckerberg said a few months ago that the company was shifting from being just a social network  to “the best personalized newspaper in the world.” In doing so, the site becomes less about your social connections and more about receiving a custom plate of information. There’s great utility there, but it may not be as enticing as getting into that first poke war with you crush back in college.

This strategy has yet to show signs of success in Facebook’s stock price, which more than a year later has failed to top its initial, disastrous public offering.

But according to Messner, Facebook has no other choice but to try and mature with its users. Myspace failed to evolve, leading to its eventual detriment. And the recent Yahoo acquisition of Tumblr demonstrates that network’s move toward the establishment.

“Being hip does not make money by itself,” he said. “And social media companies can only run for so long on venture capital. They have to grow up at some point, as disappointing that might be for some users.”