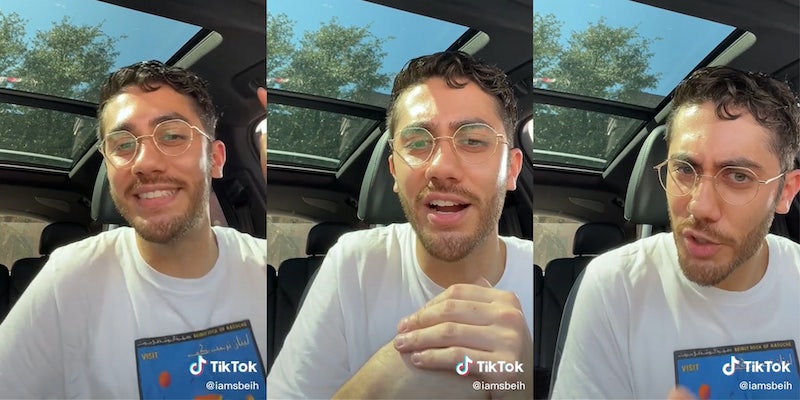 'The only piece of information she has about me is my name. My Arabic-*ss name.'

A man has gone viral on TikTok after claiming he faced discrimination from a seller on Facebook Marketplace.

In a video with over 228,000 views, TikToker Sbeih (@iamsbeih) says he had initially reached out to a woman on Facebook Marketplace after she posted a chair she wanted to sell. He received no response.

Thinking that she may have assumed he was a bot, Sbeih claims he sent further messages, specifying he lived nearby and was willing to pay full price for the chair. Still, he received no response from the woman.

As time passed, he noticed that the price of the chair was going down. He says he continued to reach out to the woman until finally questioning if there was a specific reason she did not want to sell him the chair.

The message did not go through. This led Sbeih to believe he had been blocked— and potentially discriminated against.

“I made it clear that this would have been a super easy transaction. I live in the same part of town, and I’m willing to pay full price. It would have been a quick—like, one hour max, done. So why else would she not be willing to sell it to me?” he asks. “The only piece of information she has about me is my name. My Arabic-ass name!”

At the end of the video, Sbeih questions whether he should make a fake Facebook account “under some white boy name like Chad Anderson” in order to buy the chair. In comments, many users alleged that they had faced the same discrimination—and found the same solution.

“1000% this is a thing,” wrote one user. “My dad has a separate FB account under a white name specifically for this reason.”

“Happens to me, at this point I just started using my white husband’s account,” a third user shared. “Definitely get a response when 75% of the time my account didn’t.”

Arab Americans face considerable discrimination in the United States. A 2011 study found that “an Arab male [job] applicant needed to send two resumes to every one resume sent by a white male applicant to receive a callback for an interview by the hiring personnel.” Efforts like Trump’s ‘Muslim Ban’ have also been seen as causing further discrimination against Arab Americans.

Back on TikTok, users advised against getting the chair altogether.

As one user wrote, “Babe don’t even bring that chair in your home. U don’t want her bad juju at your house not worth it.”

The Daily Dot reached out to Sbeih via Instagram direct message.