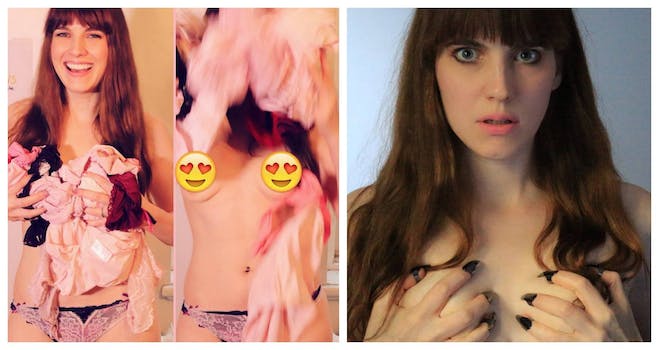 Rules about breasts have long been a gray area of social media. Cleavage shots seem to be OK when they are sexy, but pictures of women breastfeeding are banned. And now, there’s a new double standard.

Model and artist Aimee Davison recently posted a photo of herself covering her breasts with the phrase “Make America Gay Again” painted across her chest. While it was allowed on Instagram, the photo got her banned from Facebook for three days.

Instagram is owned by Facebook, but clearly the community guidelines between the two sites are different. Davison took to her YouTube channel, LOLPervs, to argue for consistency between the platforms.

Davison told the Daily Dot that she believes that the double standard can be attributed to the fact that Instagram was its own “more sexually open” company before being acquired by Facebook in 2012. “Part of me hopes that maybe this is something Facebook is not aware of yet, and that my video influences them to clarify and change their policies to be more in line with Instagram’s and to be more clear to users,” she said.

Response to Davison’s video has been mostly positive, with one commenter pointing out:

You can watch a guy on Facebook bleed to death in his car but you can’t see a nipple. We can watch endless violence in TV and movies but show more than brief nudity (a very quick glimpse of a butt or a boob) and it’s slapped with an R Rating. I never understood why you can show a male nipple but not a female nipple. They are basically the same visually.

But another commenter likened showing breasts on Facebook to waving a pizza under a hungry person’s nose and then not letting them have any.

In connection with the video, Davison has started a #30DaysofBreastfies campaign to show people that a strong, confident woman should have the power to portray her body any way she pleases. Davison hopes the project, where she will post a unique breast self-portrait every day for a month, will explore the perception and reception of breasts on social media.

“I want to show how a woman is treated when she chooses to post photos of her body online, specifically areas of her body that are typically sexualized by our culture,” she said.