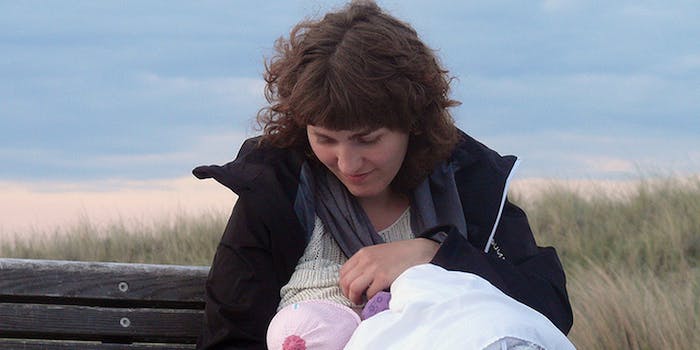 Facebook bungles its response to yet another breastfeeding photo

A video of a woman giving a man oral sex, however, is still up and running.

A new mother is publicly blasting Facebook for removing a photo of her breastfeeding her infant daughter, despite the fact that Facebook’s rules specifically allow users to upload breastfeeding photos.

24-year-old Emma Bond, who gave birth to her premature daughter Carene earlier this month, posted a photo of her breastfeeding on a pro-breastfeeding website, where hundreds of thousands of users liked the image. When users started sharing Bond’s photo on Facebook, however, she was astonished to see Facebook remove it on the grounds that an anonymous user had flagged it as “offensive.”

“It was the first time she had breastfed so there was a reason for me posting that particular picture,” said Bond, whose daughter Carene weighs a little more than two pounds and was born 12 weeks before her delivery date. “It was a magical moment and to have it removed the same day for breaching nudity policies was really rubbing salts in the wounds.”

A Facebook spokesperson told the Daily Dot that the company has always allowed users to upload breastfeeding photos, but that the nipple in the photo has to be covered. However, the continued flagging of breastfeeding photos prompted the company to officially change its policy earlier this year. “We agree that breastfeeding is natural and beautiful and we’re glad to know that it’s important for mothers to share their experiences with others on Facebook,” Facebook’s website states. “The vast majority of these photos are compliant with our policies.”

So why, then, was Bond’s photo removed? According to Facebook, the image was deleted from the site “in error.”

“Facebook modified the way it reviews reports of nudity to better examine the context of the photo or image,” a company spokesperson wrote in a message to Bond. “As a result of this, photos that show a nursing mothers’ other breast will be allowed even if it is fully exposed, as will mastectomy photos showing a fully exposed other breast.”

Bond’s photo has since been republished.

Facebook seems genuinely contrite about the snafu, but it raises the question of how the company formulates what are fundamentally arbitrary policies. Users continue to flag breastfeeding photos, sometimes getting them removed, but sexually explicit content and images of animal cruelty are allowed on the platform day after day. (A video of a woman giving oral sex to a man at a Dutch nightclub is still up on Facebook, despite the fact that it has been shared more than 40,000 times.)

Facebook’s policies raise important questions about misogyny, the cultural sexualization of women’s bodies, and the definition of community standards. At the end of the day, however, Facebook’s breastfeeding censorship problem may have less to do with the service and more to do with its users.