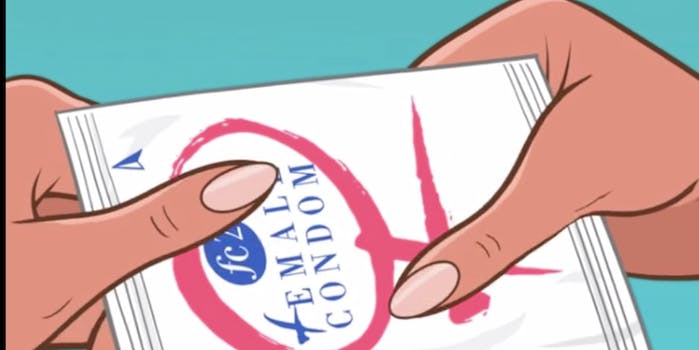 The social network has banned this educational cartoon.

Large social networks aren’t exactly known for their progressive attitudes toward female sexuality, and Facebook is no exception.

Last week, Facebook sent a takedown request to Tea Time and Sex Chats, a sexual health organization at the University of Chicago, over a cartoon video demonstrating how to use a female condom, and despite compliance, proceeded to take down the entire page.

According to Tea Time and Sex Chats founder Patty Fernandez, who spoke with Jezebel last week, the group put up the five-minute video last August with the caption: “Silly animation and peppy acoustic music: Obvs the cutest way to learn about an awesome contraceptive choice!” The educational video shows a woman inserting an Fc2 female condom into her vagina. (It’s obviously NSFW, but you can watch it below.)

A few days later, Tea Time and Sex Chats received a message from Facebook admins telling the group to take down the video, on the grounds that it violated community standards. (Facebook prohibits nudity and sexual content of any kind.) While Tea Time and Sex Chats immediately complied, Facebook still banned the organization’s entire page.

Tea Time and Sex Chats is currently trying to appeal Facebook’s decision, though one of the page’s admins says it might not do any good. “I was given the option to appeal, which was a single button without any way for me to ask questions or make a comment,” she says. But the removal of the page has sparked outrage in the blogosphere and from University of Chicago students, who have been using Tea Time and Sex Chats as a resource for sexual health and safety information since 2012.

The real issue with the page’s removal, though, is not that University of Chicago students have been deprived of a legitimate sexual health information source or that Facebook has overly puritanical community standards. (You could certainly argue both.) The real issue is the double standard by which the site judges all forms of sexual expression, particularly female sexual expression.

As Jezebel points out, if someone posts sexually explicit, offensive, or even outright criminal content without any actual nudity, it can be up on the site for years. But traditionally, the second a mother posts a breastfeeding photo or a cancer survivor puts up an album of her mastectomy scars, Facebook has flipped out. In the eyes of Facebook, videos of beheadings seem to have more value than a campus health organization’s instructional video of how to use a legal sexual health device.

Facebook has made a concerted effort to recognizes its own issues with its community standards. After breast cancer survivors protested Facebook’s censorship of post-mastectomy photos, for example, the site amended its anti-nudity policy.)

But every time something like this happens, apologizing after the fact is simply not enough. If Facebook wants to retain its younger members, particularly its younger female members—an issue it’s been struggling with over the past few years—then it’s going to have to do better.