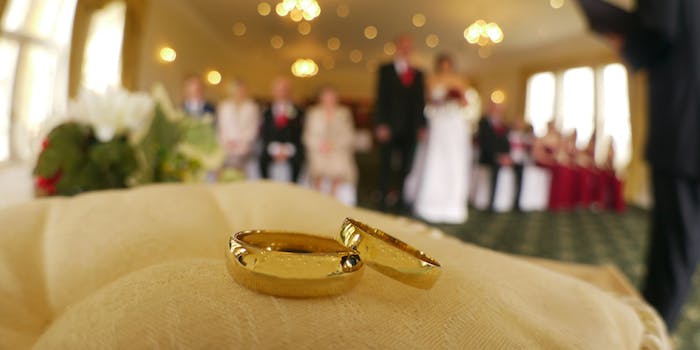 The odds of meeting the love of your life in college

Here are the institutions where you're likely to get lucky—for life.

Meeting your future spouse at college is certainly a prevalent fantasy in the U.S.—it’s even a selling point for some institutions of higher learning—but just how common is it? With access to plenty of users’ social and educational backgrounds, the Facebook Data Science Team set out to get some hard numbers for a project called “From Classmates to Soulmates.”

Examining “aggregate, anonymized data on all couples in the U.S. who both list themselves as being married to each other, along with the high schools and colleges they attended,” researchers Sofus Attila Macskassy and Lada Adamic were able to come up with some fascinating maps. Here we see the nation’s high schools “colored by the likelihood that someone attending the high school ends up marrying someone from that same high school. Blue means less likely, red means very likely.” 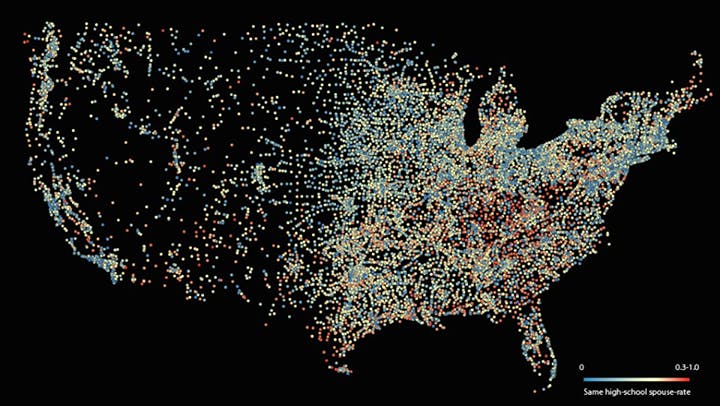 Overall, about 15 percent of people were married to a high school sweetheart (whether they got together at an older age wasn’t part of the study), though students in rural areas were more likely to find their spouses within that dating pool. A second map corresponds to the finding that “about 28 percent of married college-graduates attended the same college,” though here geography is not so much a factor—instead it’s a matter of gender ratio and religious affiliation. About 60 percent of all Brigham Young University alumni were married to fellow alumni, for example, and women were most likely to marry a classmate if they attended Rose-Hulman Institute of Technology, where men make up a whopping 88 percent of the population. 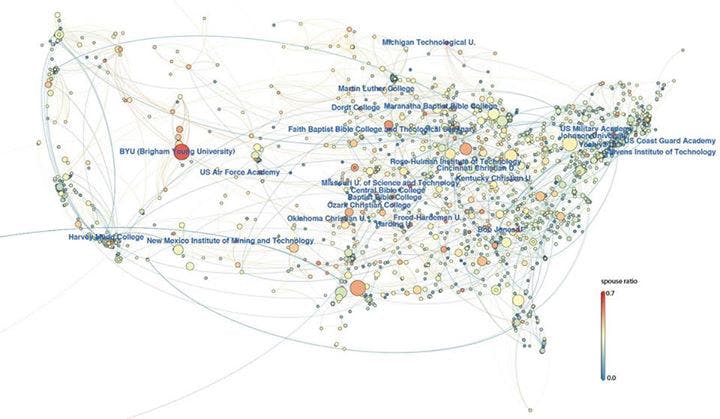 The information collected also suggested that larger schools may be better at facilitating a match made in heaven (as there are more matches to be made) and that similar political leanings mildly correlate to the likelihood that two alumni will marry. All in all, there may not be any big surprises here—people tend to get together when they have a few things in common, whether personal or environmental—but at the very least, these results affirm the conventional wisdom that you ought to make the most of your college years. Just don’t tell your parents they were right.