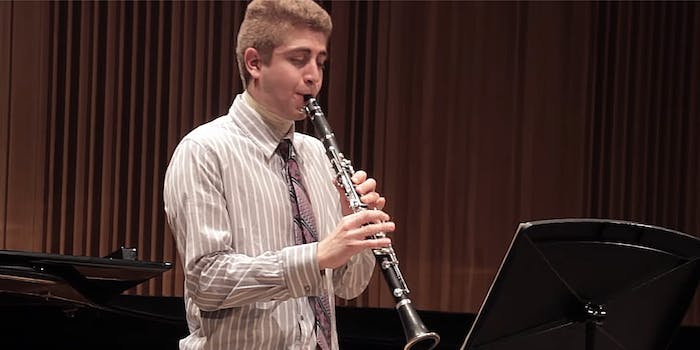 Clarinetist wins suit against ex who deleted his scholarship offer

The ex also sent him a fake rejection letter.

Four years after receiving what turned out to be a fake scholarship rejection sent by his then-girlfriend, clarinetist Eric Abramovitz has successfully sued his now-ex for $350,000 dollars.

Abramovitz had dreamed of attending the Colburn Conservatory of Music in Los Angeles from a young age. After a long and competitive audition during his sophomore year of college at McGill University, he was offered a full ride scholarship, worth approximately $50,000 a year, and the opportunity to study under Colburn’s clarinet master, Yehuda Gilad. Unfortunately, the only email Abramovitz saw was a rejection, not sent by Gilad, but by Abramovitz’s then-girlfriend, Jennifer Lee. It came from a fake email meant to look like it was written by Gilad himself.

According to the lawsuit filed by Abramovitz, Lee saw the acceptance email, and out of a fear of losing her boyfriend to his dream, replied pretending to be him. She rejected the scholarship, saying Abramovitz “would be elsewhere.” She then deleted the email and created a fake email address for Gilad, from which she emailed Abramovitz a rejection. She even offered him a partial scholarship, knowing full well that the remaining cost was more than he could afford. In spite of her machinations, the couple broke up six months later.

The true nature of the scholarship rejection began to come to light when Abramovitz, determined to study with Gilad, auditioned at another university where he taught, USC. After a somewhat tense audition, they spoke and Gilad asked why he had come after rejecting his offer. “I was like, ‘Uh, no, you rejected me,’ and he was like, ‘No, you did,’ and we had this awkward exchange where we kept going back and forth like that,” Abramovitz told BuzzFeed News. When he showed Gilad the rejection email, the professor told him it wasn’t his email address.

At first, Abramovitz didn’t suspect his ex-girlfriend, but at his friends’ suggestions, they tried passwords they knew she frequently used and successfully logged into the fake email account.

Wednesday’s decision in an Ontario Superior Court awarded Abramovitz the $300,000 in damages he sought, as well as an additional $50,000, which the judge added for Lee’s “despicable interference.” In spite of that interference, Abramovitz said to BuzzFeed News, “I have no regrets. I have always aspired to make a living doing what I love, and I have, so I am very fortunate.”