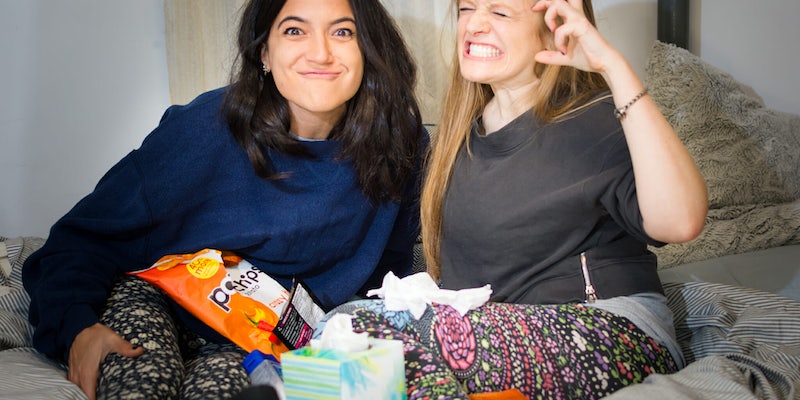 ‘Crazy; in bed’ is the hilarious, comforting mental health podcast we need in 2018

“Our eyes locked across a crowded room, and we were like, ‘Get us the fuck out of here.’”

May Wilkerson kicks off the fourth episode of her podcast, Crazy; in Bed, with this anecdote about how social-anxiety brought her and co-host Alyssa Limperis together. It’s a perfect snapshot of their friendship and what makes their podcast so likable: It’s cheerful, irreverent, and tucked away just enough from the outside world to make you feel cozy and safe.

Wilkerson and Limperis met doing stand-up in New York City, but they soon discovered they had much more in common than comedy. They’ve bared their souls to each other about alcoholism, eating disorders, depression, and anxiety—and on Crazy; in Bed, they welcome guests to do the same.

Whether you’re reeling from the stresses of 2017 or triggered by YouTube stars Logan Paul handling suicide so callously, Crazy; in Bed wants you to know that you’re not alone.

Wilkerson added, “It sucks that he did that because he probably did trigger a lot of people, but the backlash against him seems like it’s been productive in a lot of ways. Partially, people are trying to make up for the mess that he caused, but hopefully, it’s leading to positive conversations.”

This comforting real talk is what makes Crazy; in Bed so accessible—while the content may get dark, the tone is always positive. Whether they’re talking about social media-anxiety with Teen Vogue columnist Lauren Duca, or delving into the perils of “functional” alcoholism with comedian Sydnee Washington, or simply voicing the desire to never leave the comfort of your apartment with Tonight Show writer Jasmine Pierce, Limperis and Wilkerson infuse each episode with plenty of humor and warmth. Listening to an episode feels a bit like dropping in on a slumber party where everyone’s baggage is welcome.

The hosts spend much of the podcast volleying jokes and trading stories while always holding space for their guests to go a little bit deeper. When Washington describes a New Years Eve that turned into a three-day-long drug and alcohol binge, the hosts laugh at how exhausting drinking is, and Washington matter-of-factly explains that she was prepared to keep partying because she had brought a bag with a change of clothes.

It’s a hilarious and sobering realization that often our sicknesses require our planning and commitment to self-harm. But in the midst of their humorous perspective, Limperis probes deeper and asks for practical advice for those who struggle with alcohol addiction and abuse, and Washington delivers. “I think it’s a good exercise to not drink for a week and be around the people that you’re around and see how you feel,” Washington says. “You’re like, ‘Damn, bitch, we got nothing in common. We got nothing in common except this cabernet-sauvignon. That is it, girl! You are a hot mess!’”

Perhaps the biggest theme the podcast addresses is that the path to healing has a lot to do with disclosing our more shameful moments and revealing our most uncomfortable thoughts. When Pierce describes her approach to soothing her own anxiety and that of those around her, she doesn’t advocate for sunnier thoughts. Instead, she laughs at how horribly ineffective it is to tell someone their anxiety is wrong, then she offers an alternative method for comforting a stressed-out friend. “What I usually do is just be like, ‘You’re really bad. You deserve to be set on fire,'” Pierce jokes. “‘Our boss is in the other room and I heard them, just tearing up all your jokes and saying that they’re bad, and I think one of them threw their computer out the window because your joke was so bad that they hate you now.’”

It’s a hilarious moment and one that speaks to the truth of our fears—if we really look at them head on and shine a light on them, they tend to shrivel up and die.

“There’s this thing in 12-step groups: You’re only as sick as your secrets. I think it’s definitely true. If you hide stuff from the world, that’s where sickness really gets to thrive,” explains Wilkerson.

If so, then Crazy; in Bed might just be the perfect little sunny room for coaxing out your sickness so you can smash it with humor and love.

Crazy; in Bed is available on iTunes and Stitcher. New episodes are available every Monday.