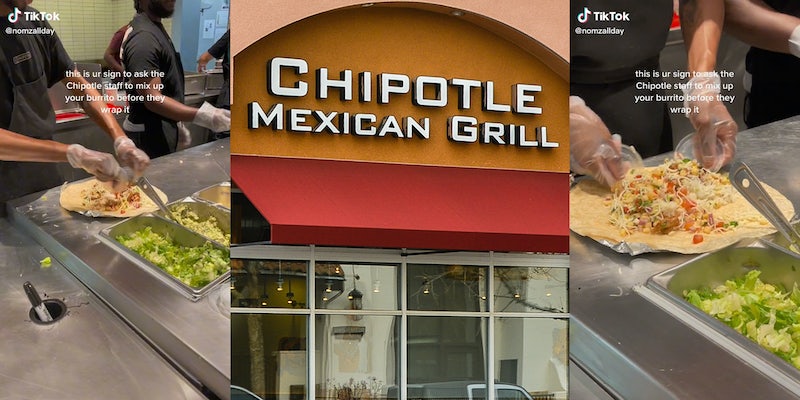 ‘TikTok making it hard for Chipotle workers’: Customer shares ‘hack’ for getting even ingredients throughout Chipotle burrito, sparking debate

'When people ask me I say no.'

A common complaint amongst burrito lovers is uneven distribution. After ordering a burrito, many are dismayed to find that, once they actually bite into the burrito, they’re met with a mouthful of sour cream or cheese rather than an equal blend of all the burrito’s respective ingredients.

Now, a user on TikTok has gone viral after sharing their solution to this issue—and sparked considerable debate in the process.

In a video with over 1.4 million views, TikTok user Tristen (@nomzallday) shows a Chipotle burrito, the contents of which are being mixed by an employee using two small container lids.

“This is ur sign to ask the Chipotle staff to mix up your burrito before they wrap it,” she wrote in the text overlaying the video. In the caption, she added, “Game changer tbh.”

At first, many users supported the hack.

“This would be awesome! Tired of having a glob of cheese at the bottom,” wrote one user.

“This should just be the standard,” added another.

“This! I like mine mixed too,” agreed a third.

However, alleged former and current Chipotle workers quickly came out to say that they are against customers doing this.

“Tiktok making it hard for chipotle workers,” offered a second.

“When people ask me i say no,” claimed a further TikToker.

The reason for their opposition? While many claim that the mixed burrito is a better burrito experience, workers say that they simply do not have time to mix every burrito, and that doing so leads to long lines.

“If u do this, please do it when the store is empty,” noted a user. “It’s already stressful enough w/ a line of customers.”

Additionally, some users claimed they’ve had their request to do this refused, or that they’ve refused the request themselves.

“They said no when I asked,” alleged a commenter.

“They told us not to do this in training lol,” another TikToker wrote.

Instead, some users advised simply getting a bowl with a tortilla on the side. This way, a customer can control the contents of their own burrito.

“I just get a bowl with a tortilla on the side and mix it myself,” shared a TikToker.

“They get mad when I ask but it literally takes 10 seconds and it’s worth it,” a user explained.

The Daily Dot reached out to Chipotle and Tristen via email.