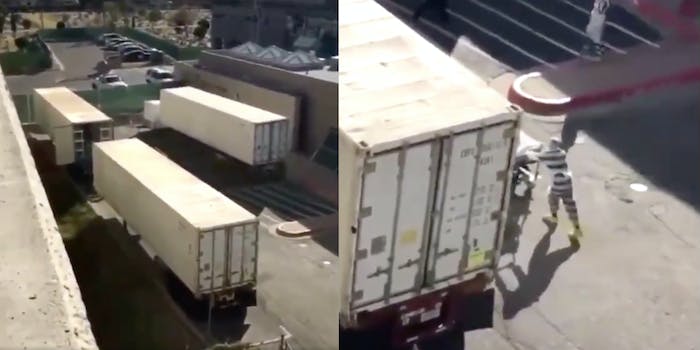 'Enslaved convict labor in a pandemic. this country is a living nightmare.'

The coronavirus situation in El Paso, Texas, is dire: Hospitals and intensive care units reportedly hit 100% capacity about three weeks ago, and the numbers have only risen since, according to KFOX14. Cases are still soaring, with a whopping 1,512 recorded new ones on Saturday alone. And patients are reportedly dying faster than El Paso County can investigate them.

According to KTSM, El Paso County Detention Facility inmates are assisting in moving bodies of coronavirus victims at the El Paso Medical Examiner’s Office, where there is an overflow of bodies awaiting autopsy.

To help with the overflow, El Paso set up 10 mobile morgues outside the office. The inmates were spotted near the mobile morgues and inside the building in full personal protective equipment (PPE) gear on Friday, according to KTSM. When speaking with the station, an El Paso County Sheriff’s spokesperson refused to go into specifics about the inmates’ tasks, only saying they were “helping them there.”

Eric Ding, an epidemiologist and health economist, posted photos, and later a video, showing the inmates moving the bodies. People think it underscores just how poorly Texas, and the U.S. in general, has handled the coronavirus pandemic, with many calling the nation a “failed state.” “Enslaved convict labor in a pandemic. this country is a living nightmare,” one user wrote in response.

“He needs to be forced to resign,” another said of Texas Attorney General Ken Paxton, who sued to block El Paso County Judge Ricardo Samaniego’s shutdown order of nonessential businesses in order to help slow the spread of the coronavirus. The court ultimately ruled that Samaniego could not supersede Abbott’s Oct. 7 order regarding reopening, according to CBS News.

Recently, a traveling nurse also went viral after posting a video describing the conditions inside an El Paso hospital, where it has been confirmed that she worked for a brief time. In the video, she accuses the hospital of not aggressively treating COVID-19 patients and claimed El Paso’s COVID-19 crisis is worse than New York’s crisis was. She worked inside “the pit,” where, she said, patients only came out in a body bag.