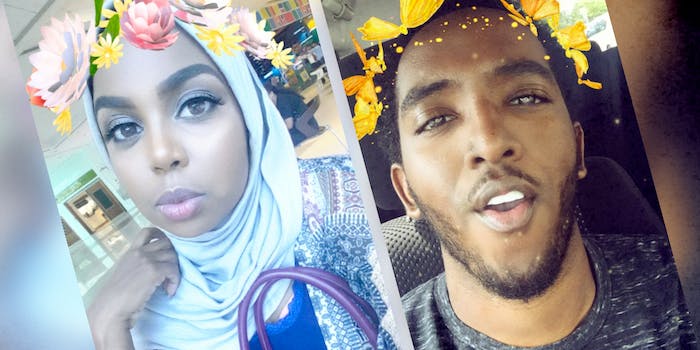 The #BlackOutEid hashtag is full of pride and slayage.

The four-day Muslim holiday Eid al-Adha, known as the Feast of Sacrifice, begins today. Traditionally, it is celebrated with sacrificing a large animal to share with the poor, commemorating when God appeared to Abraham and asked him to give up his son. It also honors the height of Hajj, or the pilgrimage to Mecca.

In these more modern times, though, a good Eid celebration calls for a few selfies. Muslim women are taking to social media today to post gorgeous selfies with the hashtag #EidMubarak(meaning “blessed holiday” in Arabic), while #BlackOutEid is also slaying, featuring black Muslim women decked out in stunning hijabs, jewel-studded gowns, and Snapchat beauty filters. A spinoff of #BlackOutDay, which began as a celebration of African-American beauty on Twitter, the Eid selfies show that traditional religious dress can be just as stylish and glam as the red carpet at the Emmys.

According to a 2015 BuzzFeed story, #BlackOutEid, in particular, first arose during last year’s Eid al-Fitr—when the end of Ramadan fasting is celebrated by indulging in feasts and glamour—and continued to the autumn Eid.

In another article this July, BuzzFeed noted that some black Muslims were posting online about the lack of black representation in Snapchat’s Eid story—and suggesting that #BlackOutEid was a direct response to the low visibility of black Muslims.

Ladies weren’t the only ones bringing fierce #BlackOutEid looks on Monday. Guys joined in to show off their threads along with portraits of their entire families dressed in their holiday best, too.

The selfie celebration also took place on Instagram and Tumblr, with Muslims from around the world posting photos.

But glamorous selfies aren’t all that Eid is about: Many Muslim Americans will attend religious services and family feasts, as well as exchange gifts and make charitable donations.

And of course, everyone will greet each other with the traditional holiday shout-out of “Eid Mubarak.” Happy Eid, everyone!