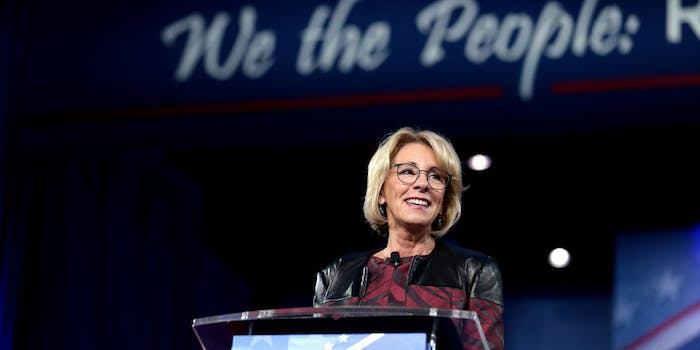 The 'clarification' by the Education Department has created more questions.

The Department of Education has clarified its stance on discrimination against transgender students, telling BuzzFeed News that it will no longer take complaints from students who say they’ve been prevented from using the restroom corresponding with their gender identity.

Liz Hill, a spokesperson for the agency, told BuzzFeed News that Title IX, the federal law protecting against gender discrimination, doesn’t apply to transgender students on the basis of restroom and facility usage.

“Where students, including transgender students, are penalized or harassed for failing to conform to sex-based stereotypes, that is sex discrimination prohibited by Title IX,” Hill told BuzzFeed News. “In the case of bathrooms, however, long-standing regulations provide that separating facilities on the basis of sex is not a form of discrimination prohibited by Title IX.”

According to the publication, the department’s new stance is its first public assertion of its interpretation of the law since it and the Justice Department rescinded an Obama-era guidance that allowed transgender students to use restrooms and other facilities corresponding to their gender identity in 2017.

At the time, the Trump administration stated officials would “more completely consider the legal issues involved.” Months later, Candice Jackson, acting head of the department’s Office for Civil Rights, issued a memo saying it would be “permissible” for a restroom discrimination complaint to be dismissed.

The department’s stance contradicts two federal appeals courts, which both determined that Title IX protects transgender students using facilities matching their gender identity. Additionally, Title IX does state it bans discrimination, “on the basis of sex”—the term “sex,” as BuzzFeed News points out, however, is not defined as gender identity or sex assigned at birth.

The department did not answer BuzzFeed News’ questions regarding this conflict of opinion, nor did it explain its refusal to accept complaints from students encompassed in the appeals court circuits.

“That interpretation represents an appalling abdication of federal enforcement responsibility, inconsistent with the law and with courts’ interpretation of the law, and totally lacking in human compassion for children in school, whom the Department is charged to protect,” Catherine Lhamon, an Obama-era Department of Education Office for Civil Rights leader, told BuzzFeed News.