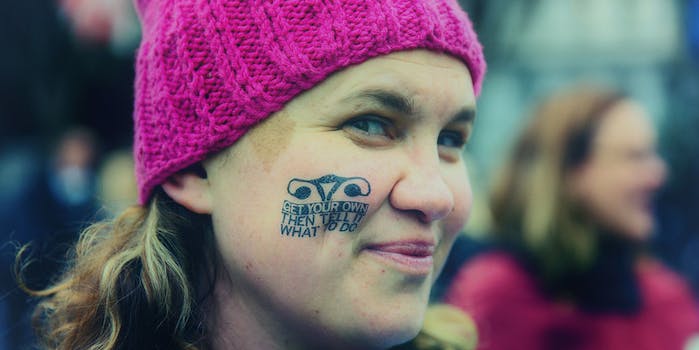 The legislation targets the Hyde Amendment.

New legislation introduced to Congress today could lead to a huge victory for reproductive rights advocates—and the millions of women covered by Medicaid.

In 1976 the Hyde Amendment was written to block federal Medicaid funding for abortion services. Forty years later and it’s still here, and it’s a huge roadblock for women’s rights activists.

Rep. Barbara Lee (D-Calif.) and Rep. Jan Schakowsky (D-Ill.) introduced the EACH Woman Act to members of Congress, which aims to ensure that every woman who receives healthcare through the federal government will be covered for all pregnancy-related services, including abortion.

“It is unconscionable that women are still denied comprehensive reproductive health care, including abortion coverage, because of how much they earn or where they live,” Lee said in a press statement. “The federal government has no place interfering in the personal decisions women make about their bodies by denying health coverage.”

The introduction of the EACH Woman Act comes on the heels of a recent House proposal to make Hyde permanent.

For years low-income women have paid the highest price when it comes to restrictions on abortion access, often because cuts to Medicaid funding are the only vehicle through which legislators can enact abortion restrictions.

The Hyde Amendment particularly impacts low-income women, women of color, and immigrants, many of whom rely on Medicaid for their primary healthcare coverage. It also disproportionately affects Native American women, women in federal prisons, and women in the military. Its repeal would allow all women to access abortion care, regardless of wealth.

The Hyde Amendment’s repeal became a key point in Hillary Clinton’s campaign platform. This was seen as a major step toward equal access for abortion. But after 40 years of the same restrictive legislation, attitudes toward equal access to abortion have changed. According to a June 2015 poll, 86 percent of voters think that a woman’s wealth should not deny her access to healthcare.

Because Hyde is a federal amendment, it bans federal Medicaid from releasing funds to cover abortion—but it doesn’t stop states from using their own funds to extend coverage.

Today there are 17 states that extend abortion coverage to Medicaid, and six more states where funds are extended only in specific circumstances, such as a pregnancy that might endanger a woman’s life. This means that half the country is still restricted by Hyde.

If the EACH Woman Act passes, states will no longer determine whether or not Medicaid covers abortion care, though some states could still make abortion difficult to access through other legislation.