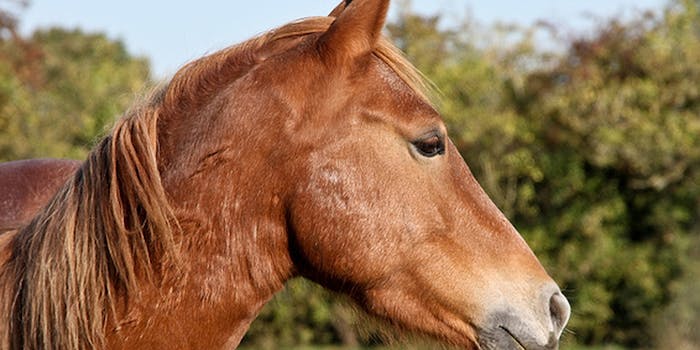 Dying woman says goodbye to the horse she raised from birth

There was nary a dry eye in the area as Sheila Marsh said goodbye to Bronwen.

Sheila Marsh, grandmother of four and a lover of animals all her life, passed away this week at the age of 77, but not before the staff at the Wigan Royal Infirmary granted her one last wish: the chance to bid adieu to Bronwen, a 25-year-old show horse she’d raised since he was a foal.

“Sheila gently called to Bronwen and the horse bent down tenderly and kissed her on the cheek as they said their last goodbyes,” bereavement liaison specialist Gail Taylor told the Manchester Evening News.

“I was crying my eyes out and all the nurses were crying too,” said Sheila’s daughter, Tina Marsh. “She took comfort out of it and it was a beautiful moment.”

Just hours later, Sheila was gone, having succumbed to cancer.

With the blessing of Marsh’s family, Andrew Foster, chief executive of the Wrightington, Wigan and Leigh NHS Foundation Trust, tweeted a photo of the tender goodbye:

With family permission here is the amazing photo of a (sadly now RIP) patient being granted her dying wish @WWLNHS pic.twitter.com/UyqfnxrsQ3