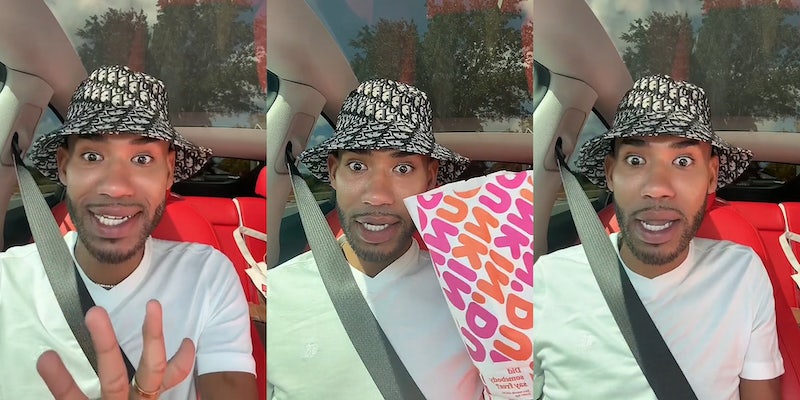 ‘He really had the AUDACITY’: Customer claims Dunkin’ worker scammed him out of $2, wouldn’t give him a receipt

'MAN HAVE I BEEN GETTING SCAMMED THIS WHOLE TIME.'

A customer claims he was scammed by a Dunkin’ worker, paying $2 more than usual for his regular order of bagels.

User Drew (@infamousxdrew) shared with his 73,000 followers how he believed he was scammed by Dunkin’. “You guys, I’m pretty sure I got scammed. It was only a couple of dollars but from a Dunkin’ Donuts employee,” he alleges.

Drew states he regularly orders bagels from Dunkin’, and it typically totals up to a little over $6. This time, it was $8. When he asked the employee for a receipt, Drew says he was told they “don’t have any receipt paper.”

He then requested to see a breakdown of his payment, but the employee said he would need to come inside. In addition, the employees asked Drew to wait in the parking lot for his bagels.

As soon as an employee approached Drew’s car with his order, the TikToker asked for the other employee’s name. He claims he could hear the other employee through the headset accusing Drew of complaining. Drew says he received the Dunkin’ manager’s number and plans to speak with him.

Drew vented his frustration in the caption. “He really had the AUDACITY where’s my $2 at??” he wrote.

The video has been viewed over 191,000 times since it was posted Sept. 22. Several viewers in the comments claimed they’ve experienced similar one-off upcharges, leading them to question whether or not they were scammed by employees.

“This happened to me …. And now im thinking???? Cause I thought they just got expensive?? LMAO MAN HAVE I BEEN GETTING SCAMMED THIS WHOLE TIME,” one viewer stated.

“My Dunkin tried scamming me, double charged everything and handed me cash to make up for his scam,” a second shared.

“Same thing happened to meeeee they charged me $4 for a bagel,” a third wrote.

Others offered reasons why Drew’s order would have increased in cost—and why the employee would be so reluctant to give him the receipt.

“To be completely honest the prices at Dunkin have went up recently and he probably didnt want blamed for it again,” one person suggested.

“He probably just did something wrong, maybe he’s new,” a second proposed.

The Daily Dot reached out to Drew via email and TikTok comment, as well as to Dunkin’ via press email.