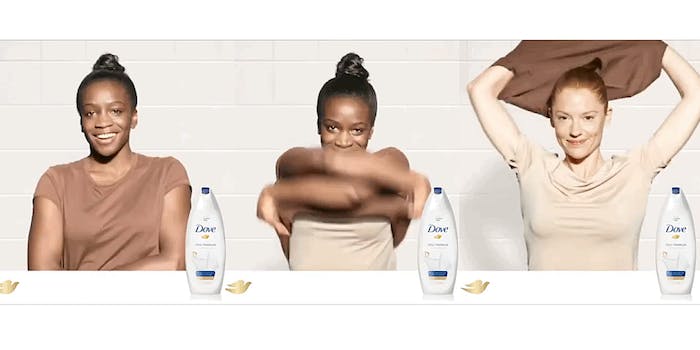 Dove’s latest Facebook ad is leaving many women of color scratching their heads over its blatant racism.

Last week, Dove published a three-second GIF depicting three women stripping off their shirts to show another woman underneath. But in one case, a Black woman in a brown shirt takes off her shirt to reveal a white woman in a lighter shirt. Many claim Dove’s ad draws on age-old racist depictions in beauty commercials, where Black people are considered dirty and white people are shown as good or pure.

It didn’t take long for stills from the ad to circulate across the internet, breaking down just how racist it is toward Black women. Dove has since apologized for the ad and pulled it from Facebook.

“An image we recently posted on Facebook missed the mark in representing women of color thoughtfully,” Dove wrote in a tweet. “We deeply regret the offense it caused.”

An image we recently posted on Facebook missed the mark in representing women of color thoughtfully. We deeply regret the offense it caused.

But many think the apology isn’t enough. In fact, some are still surprised that an entire marketing division approved the idea.

Thought that Dove ad was fake until the apology happened. People actually sat at a table and said "Yeah post that picture"? 😒 pic.twitter.com/DZyj2jMned

I really would like to know who exactly had a seat at the table making this decision. https://t.co/rPRxB61Exl

Others argued that this is an ongoing issue with Dove ads, as the company tends to showcase Black people as lesser than white people.

Missed the mark before and again… I know you will keep missing. Weak apology @dove soap banned in my house. pic.twitter.com/LixxEFXBXe

the racist dove ad is a continuation of a long history of racist soap advertising pic.twitter.com/nO7iDT7dxH

Selma and 13TH director Ava DuVernay even called out Dove, saying that the company owes a better apology than “missed the mark.”

You can do better than "missed the mark." Flip + diminishing. Deepens your offense. You do good work. Have been for years. Do better here.

Dove occasionally creates thoughtful beauty and body care promos, doing everything from depicting a transgender mother in its ads to representing blind peoples’ experiences. But the company has a much longer legacy of struggling with intersectional feminism, especially when it comes to bigger bodies or racist beauty standards—and this one is no exception.