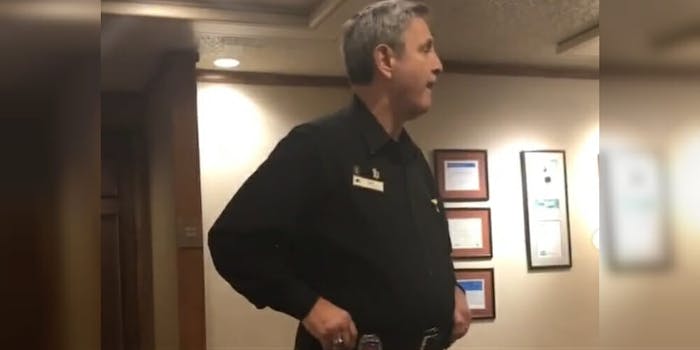 Staff at a DoubleTree Hotel in Portland, Oregan, reportedly called the police on a Black hotel guest for taking a phone call in the lobby last week.

Jermaine Massey, 34, was visiting Portland for a concert on Saturday and was on his way back to his hotel room after the show when he received a phone call. It was from his mother, and it was a family emergency, according to the Independent. Massey took a seat in a secluded part of the hotel lobby for privacy to talk with her.

According to Massey, a white security guard approached him while he was talking on the phone and asked him if he was a guest, and Massey said he was. When the guard, named Earl, prompted him for his room number, Massey told him he was on a phone call and didn’t remember the number off the top of his head. In response, Earl called the police.

In the videos posted by Massey on Instagram, he questions Earl and manager, Louis, about why they’re doing this. When he tells the guard that he’s staying at the hotel he responds, “not anymore.”

When Massey points out all the other people in the lobby who the guard hasn’t questioned, Earl says it is because they’re not loitering. Massey asks if the area is off limits and Earl responds that it is if you’re not a guest. Massey takes out his room information to show them that he is.

Even though Massey had proof that he was a guest of the hotel, the police told him that because Earl had told him to leave he was now trespassing. Faced with that threat, Massey went to find a different hotel and had to pay in full for the DoubleTree.

Massey says he feels he was racially profiled because he was the only person in the room the guard even questioned. “He knew I was a guest. He wanted to prove a point and did it in the worst way,” Massey said on Instagram. “I will be seeking justice. Believe that.”

A manager for the Portland DoubleTree told the Oregonian that they are working to resolve the matter with Massey, and characterized the incident as a “misunderstanding.”