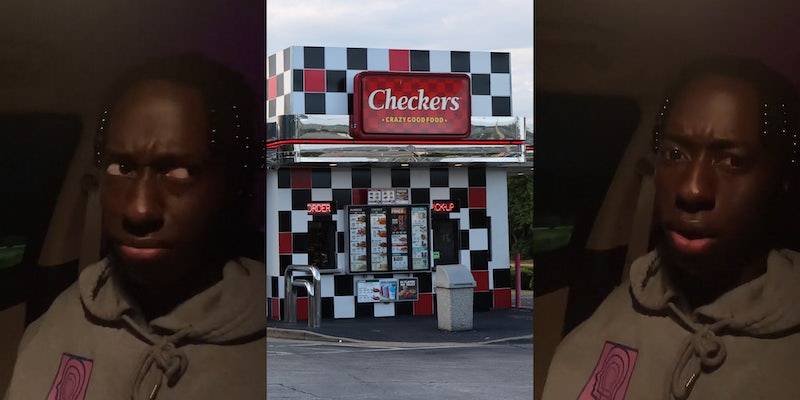 ‘You doing all this, and it’s not even that serious’: DoorDash driver says Checkers worker called him a homophobic slur after he was given the wrong order

'When I was working fast food I did not gaf when they got extra food IF I GAVE THEM THE WRONG ORDER.'

A DoorDash driver on TikTok calls out a Checkers worker for giving him the wrong order—and calling him a homophobic slur on top of it.

In a now-viral TikTok, user @keepitrellll tells his viewers about getting chewed out by a worker at Checkers while completing a DoorDash delivery. “How you homophobic and wearing a malnourished wig?” the caption of the video reads.

like that’s it? how you homophobic and wearing a malnourished wig?

According to the TikToker, it started at Checkers when the employee gave him the wrong food order, even after he had clarified his DoorDash customer’s name was Kayla.

When he delivered the food to Kayla, she informed him that it was the wrong order. The driver suggested that Kayla “ask for a refund” because, as he explains to the camera, he wasn’t going to go through any extra effort if he wasn’t being paid extra, a widespread sentiment among Dashers. To Kayla’s credit, she understood the driver’s situation and offered him another $20 to get the right Checkers order.

The TikToker returned to the Checkers drive-thru and informed the employee that he had previously been handed the wrong order. However, he claims the woman tersely replied, “You coulda just came to the window but whatever, go ahead and pull up.”

“Okay…” the driver says, confused. After the TikToker pulled up to the Checkers window and explained the situation again, the woman asked for the food from the incorrect order.

When the driver explained that he didn’t have it because the customer had already opened the bag, he says the woman slammed the window in his face and locked it. He could hear her from inside saying, “She’s not gonna get double food. If you don’t got the food then I’m not gonna do it.”

Not wanting to cause any issues, the driver offered to pay for the order. But instead of helping him out, the Checkers employee allegedly told the driver to hurry up and proceeded to slam the window in his face several more times throughout the order-taking process. He notes that he’s worked in fast food before and knows those windows can be loud, “but when I say this bitch throw the window. How about I throw your wig. I digress.”

As the woman was bagging the food she started to explain her side of the situation. Regardless of what was going on, the driver says, “You being mad aggressive, mad rude, like you talking over me like you doing all this and it’s not even that serious.” But as he was talking, the TikToker says that the employee started making the blah-blah hand gesture, often used by people when they want the other person to shut up.

He says he finally exploded at this point. “I said, ‘bitch shut the fuck up,’” he recalls, after which the DoorDash driver claims the Checkers employee called him a homophobic slur.

“And I’m like that’s it? You could have really ate me up. But that’s it…,” he says, dissing her insult. The driver ends the video with a choice insult for the employee and says that he drove off.

The video has amassed over 320,000 views as of Friday. In the comments, viewers commended the driver’s restraint and questioned why the employee was so reluctant to rectify the situation with the right order.

“How does it affect her?” asked one person.

“I don’t understand why they care. When I was working fast food I did not gaf when they got extra food IF I GAVE THEM THE WRONG ORDER,” said another. The driver responded, “LITERALLY, IMA GIVE THAT SHIT AWAY.”

However, most of viewers expressed their amusement at the fact that the TikToker started his video claiming he was going to watch what he said since he was on TikTok probation. But by the end of the video, the DoorDash driver was hurling insults at the Checkers employee.

“I THOUGHT YOU WAS WATCHING THE WAY YOU TALK LMAOO,” said one user.

“The last part did it for me,” commented another person, which the TikToker had pinned.

Update: 4:14pm CT Oct. 7 In response to a request for comment, the creator wrote in a TikTok comment that, “having a fast food job is extremely difficult, but being a good person isn’t. Acknowledge your mistakes and grown from them!”